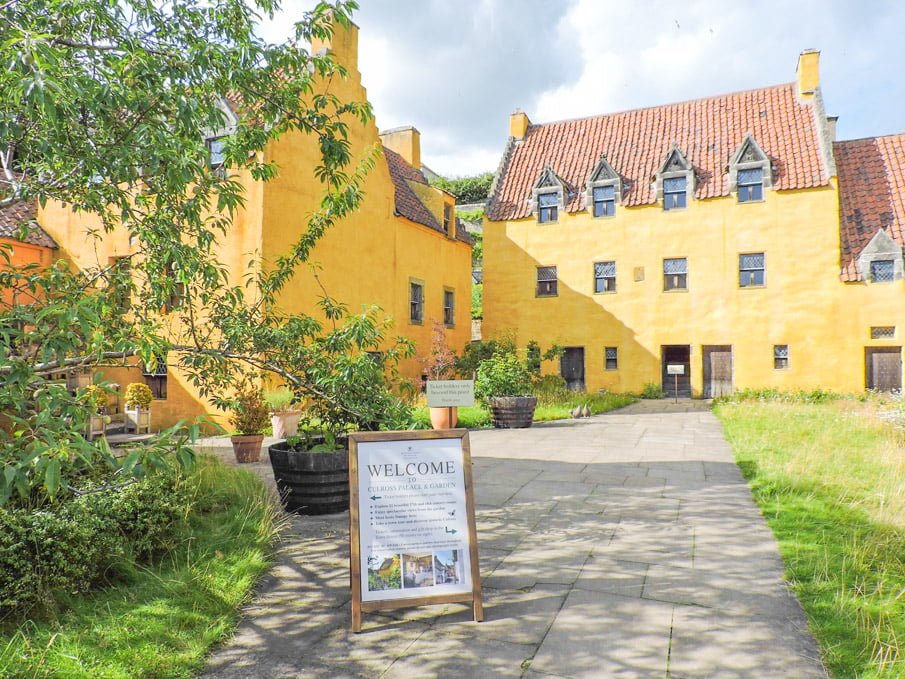 Get transported to your favourite Outlander locations! Outlander tours (Scotland) will whisk you away to walk in the footsteps of Jamie and Claire at the grand entrance of Castle Leoch, maybe pick herbs in Claire’s herb garden and stroll the cobbled streets of Cranesmuir. Our guide to Outlander tours in Scotland includes day trips and multi-day tours from Edinburgh and Glasgow as well as a popular Edinburgh walking tour.

Outlander, originally a series of books by author Diana Gabaldon, has taken the world by storm since being made into a British-American hit TV show.

Outlander has fans worldwide and sees visitors flocking to Scotland to tour the sites used during filming. Starting in 1945 Scotland Claire, played by Catriona Balfe, is a wartime nurse who returns to her husband Frank (Tobias Menzies) who whisks her away to ‘Inverness’ for a second honeymoon.

Here, after finding a collection of standing stones, Claire is hurtled back in time to Jacobite Scotland where she meets Highlander Jamie Fraser (Sam Heughan). Now showing Seasons 1-5, and season 6 being signed off, the show is massively popular.

The Outlander filming locations, mainly in Scotland, have seen their visitor numbers double, even triple and you too can see the sights of this hit show with Outlander tours from Edinburgh and Glasgow.

But aren’t some seasons set in the US?

Don’t be fooled by Jamie and Claire’s immigration to North Carolina, Scotland’s locations were still used for filming! 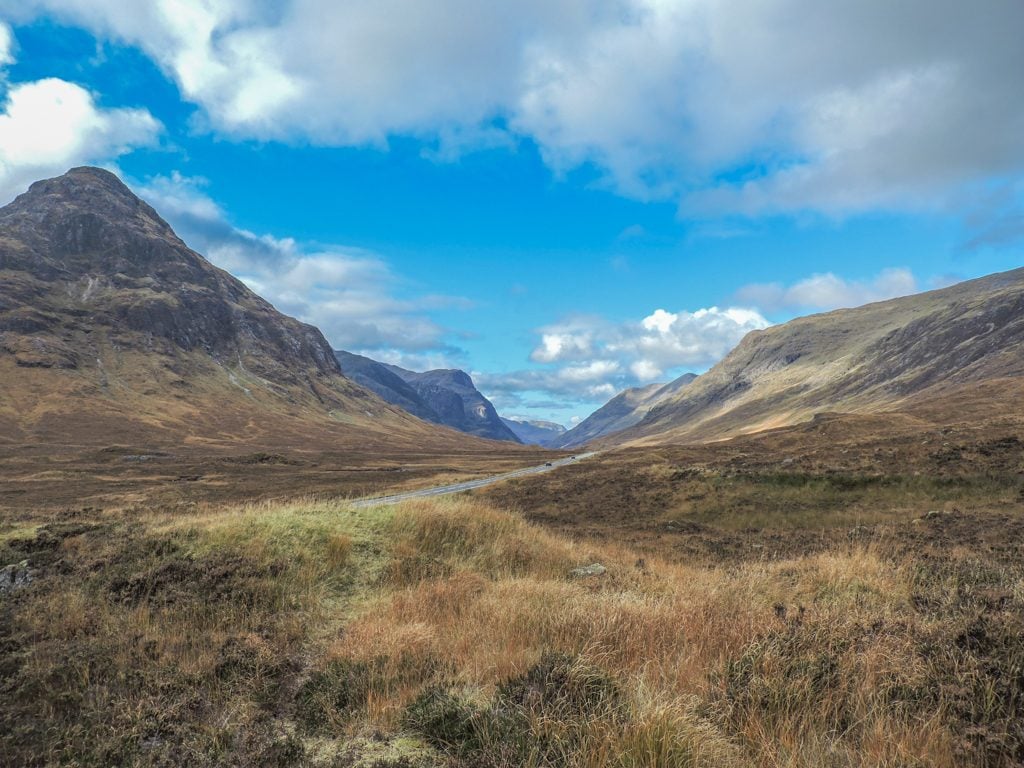 Why should you book a tour of Scotland’s Outlander sites? There are a couple of reasons why visiting the hotspots as part of a tour is better than doing it alone:

From Edinburgh: 1-day Outlander Explorer tour (I did this, awesome)

Tours from Scotland’s capital leave daily which means visitors do not need to attempt to tackle our infamous A roads or drive on the left. There are a few options for Outlander day tours from Edinburgh so you can prioritise what you want to see.

This full-day tour by a very respectable tour company in Scotland is not private but kinder on the purse strings and touches base at the following Outlander scenes:

It’s not just an Outlander tour but also a Scottish history tour. You hear about the wars and celebrities that inspired Diana Gabaldon in her writing. You can read about my tour experience here. 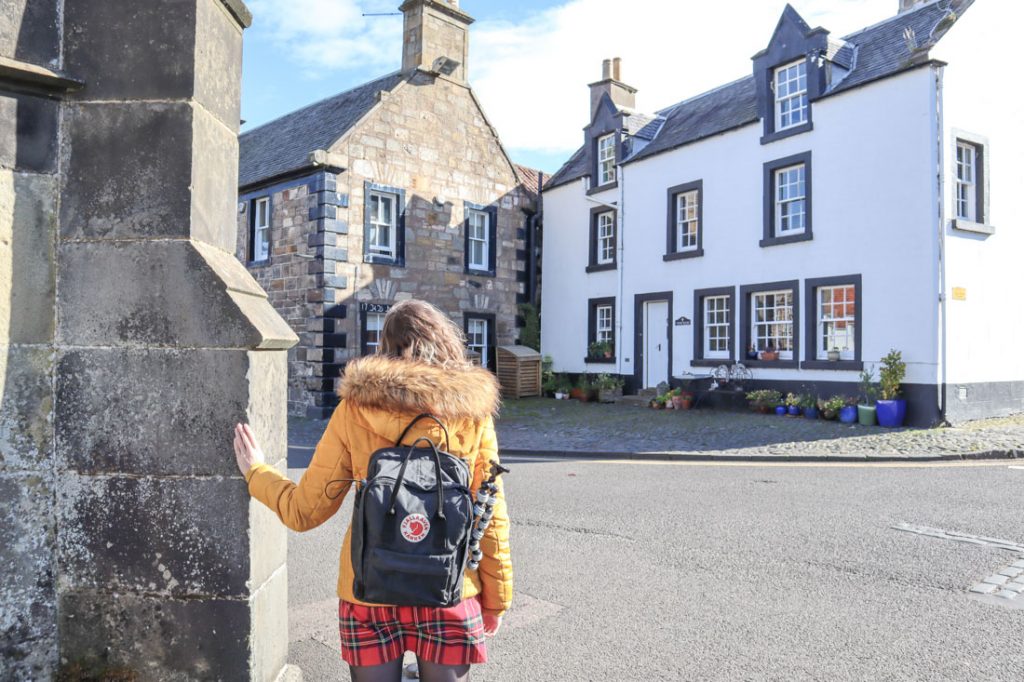 Outlander Edinburgh Tour (In The City)

Short on time but still want some Outlander fun? This Edinburgh Outlander walking tour might just scratch that itch. Although no substitute for seeing the real filming sites, still popular with our readers.

This Outlander day tour leaves from Scotland’s biggest (and best?!) city, Glasgow and not only focusses on the show locations but also the Jacobite story.

Looking for more around the city? Stop by Glasgow University’s in the West End (where Gemma graduated!)

The 4th oldest university in the English speaking languages is used as the show’s Harvard University where Frank teaches.

Close to the University, you will find Kelvingrove Park aka Outlander’s Boston Park. In the city centre, head to the Glasgow Cathedral to see where Claire volunteers as a nurse at L’Hospital Des Anges in Paris. 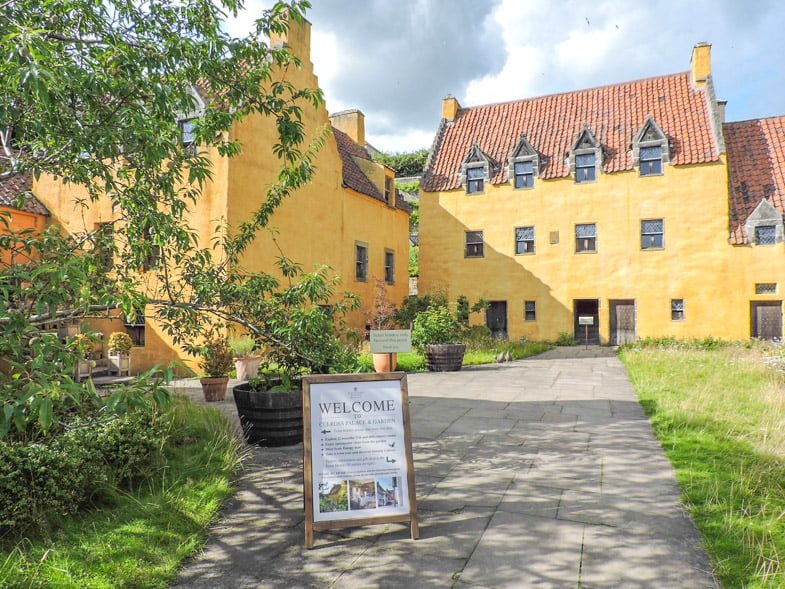 So you’ve made it to Scotland’s real Inverness and now you are looking for an Outlander tour? There is a one-day tour which shows you where Outlander got its influence from.

This Full-Day Outlander features the real Culloden (the filming location was Glen Affric) where Claire and Jamie said their tearful goodbyes.

It is also where the Jacobites, who were supporters of the Roman Catholic James VII of Scotland and II of England, took their last breath as they fought for their country on 16th April 1746.

The tour also includes a stop at Clava Cairns, a Loch Ness cruise (optional), lunch at Beauly and then a dram at a Highland whisky distillery. 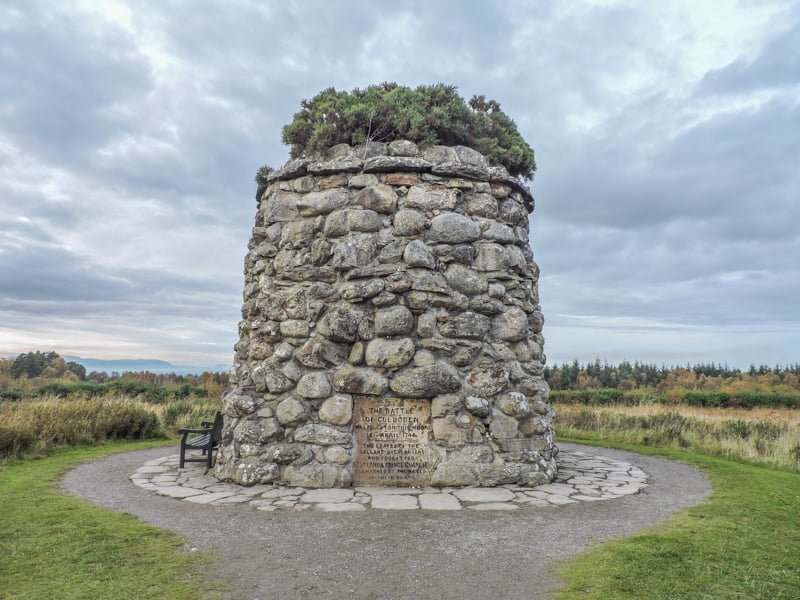 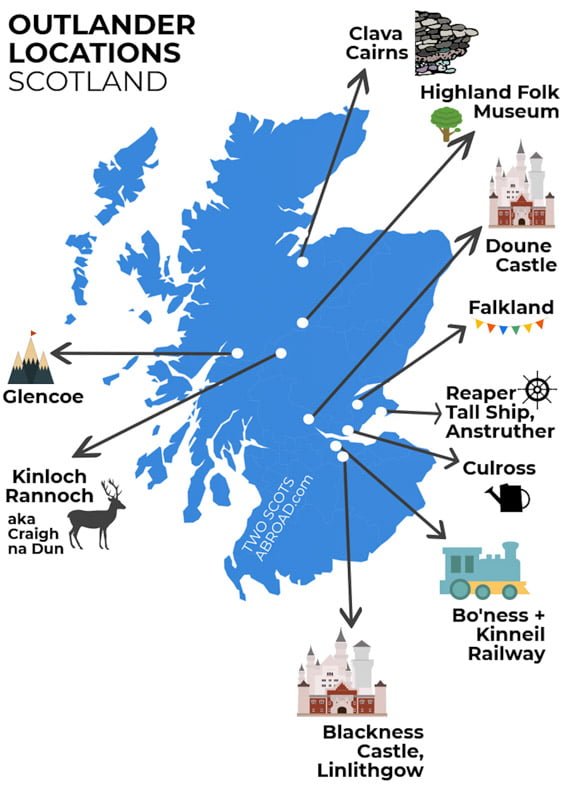 Although Culloden wasn’t officially used for filming, the event is such a major part of the series so visiting the battlefield is an emotional and saddening experience.

The award-winning visitor centre has brilliant exhibitions and a 360-degree immersion theatre puts you right in the centre of the battle.

There is an audio guide to listen to while you walk the battleground so you can listen to Gaelic, songs and tales and immerse yourself in the story of this momentous battle.

Nearby are the amazing Clava Cairns standing stones, including a majestic cairn with an atmospheric split.

However, it must have lost its magical power as there have been no reports of transportation, only visitors staying firmly in this century, disappointingly. 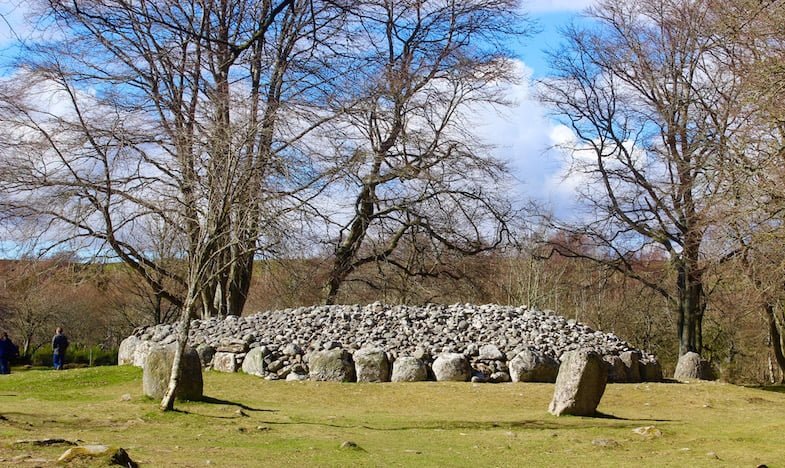 » You may also like our Scotland inspired gifts (including Outlander ideas!)

The Highland Folk Museum in Newtonmore is a favourite location used by the Outlander production team.

With the mighty Cairngorm mountains set as a backdrop, the 17th-century township really makes you feel like you are in the heart of the gritty Jacobite Highlands and lucky for us, it is live all year around.

You can witness how people used to live.

The township was used in the rent episode where Claire helped Dougal to collect the rent. Every year the museum holds an Outlander day where you can “waulk the wool”, sing traditional songs and meet traditional crafters, Highland cows and fellow fans.

Another of the most popular locations, Doune Castle in Perthshire, was the setting for Outlander Castle Leoch, home to Colum MacKenzie and his Clan.

This 14th-century courtyard castle was also used for Monty Python and the Holy Grail and (this is a lesser-known) it was Winterfell in the pilot of Game of Thrones. 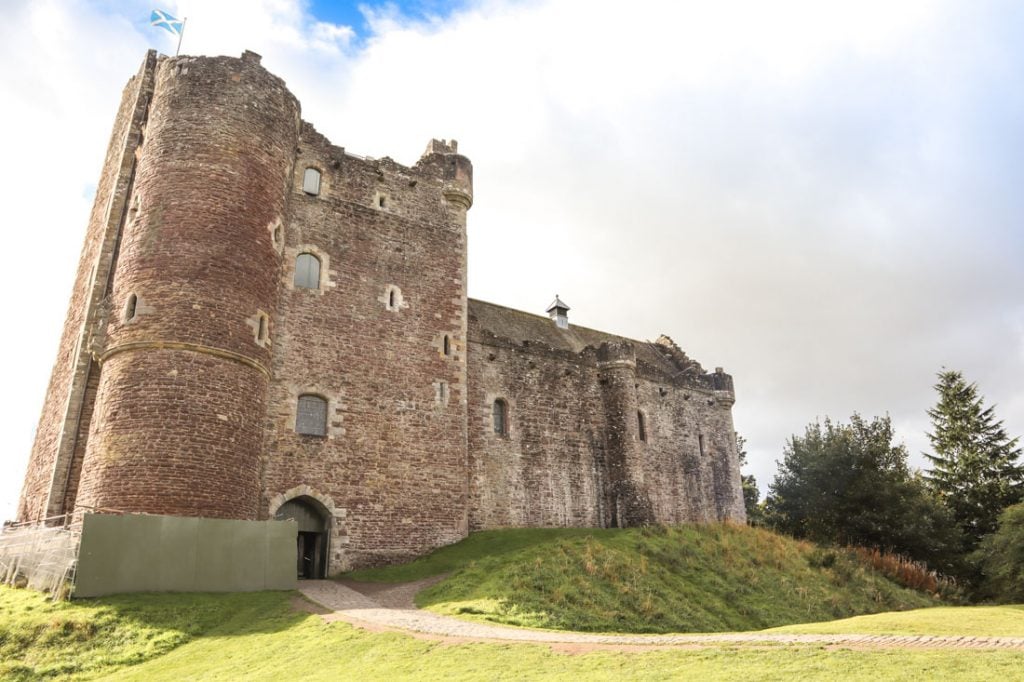 Falkland, in the Kingdom of Fife, stood in for 1945 and 1960’s Inverness. The original thatched roof houses, cobbled streets and the pretty square made it the ideal location. Here you’ll find

Pre-Outlander effect, Falkland was a lovely village to visit, it’s great to see the show give visitors a catalyst to visit.

Falkland features as the 1940’s location in season one and then is revisited in season two when we skip to the 1960s Inverness. 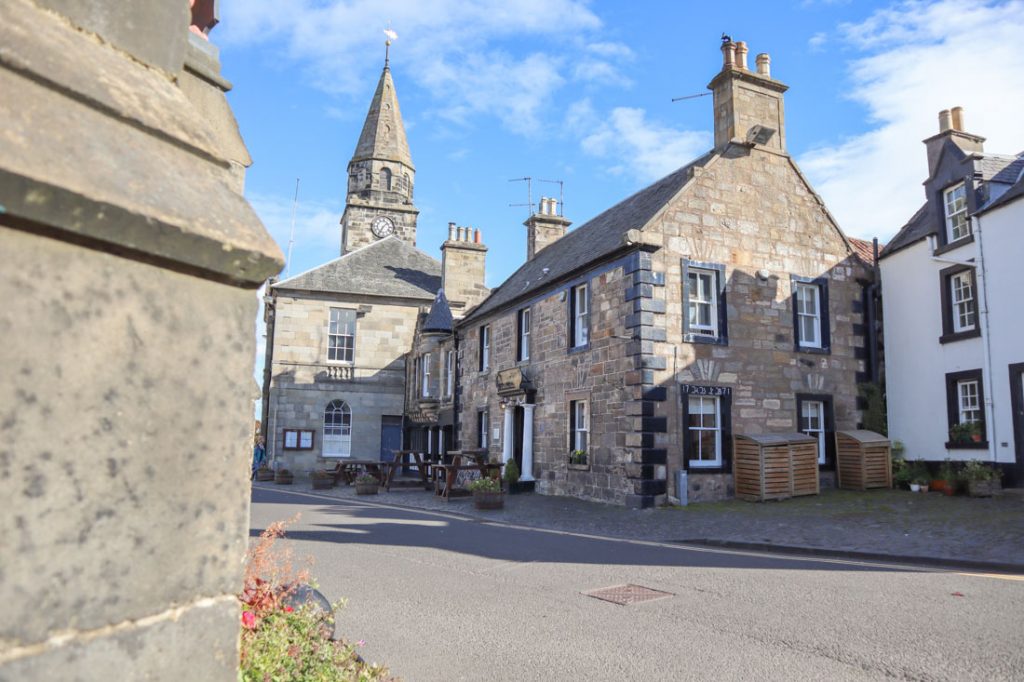 Sailing off into the distance on the Cristabel might not be possible but you can see the two-masted ship itself in the harbour of the fishing village of Anstruther in Fife.

Anstruther is a popular Summer village in its own right, famous for its fish and chips!

Le Harve Port is actually located at Dysart Harbour near Kirkcaldy and also worth a visit to see where Claire and Jamie escape to France from.

Heading to Fife? Don’t miss our ultimate guide on what to do there

If you want to see first hand what Scottish villages were like in the 17th-century visit Culross in the Kingdom of Fife.

This time warp is often said to be one of the most picturesque villages in the UK. Culross was used a lot during filming as Cranesmuir.

The mustard coloured Palace was used in filming and Claire’s herb garden is, in fact, the palace’s gardens, which you can explore.

The Mercat Cross was where the little boy had his ear nailed to the post and Geillis Duncan’s house is behind it.

A lot of Outlander action for such a small (but cute) village.

Dunfermline, next to Culross made it into the best places to visit in Scotland this year. Find out more here.

» » Let someone else do the driving. Read our review of the Outlander Explorer Day Tour « «

If you fancy a trip on a steam train while you are in Scotland why not visit Bo’ness Railway Station and take a journey on the same train Claire waved from? You can even have afternoon tea on board! 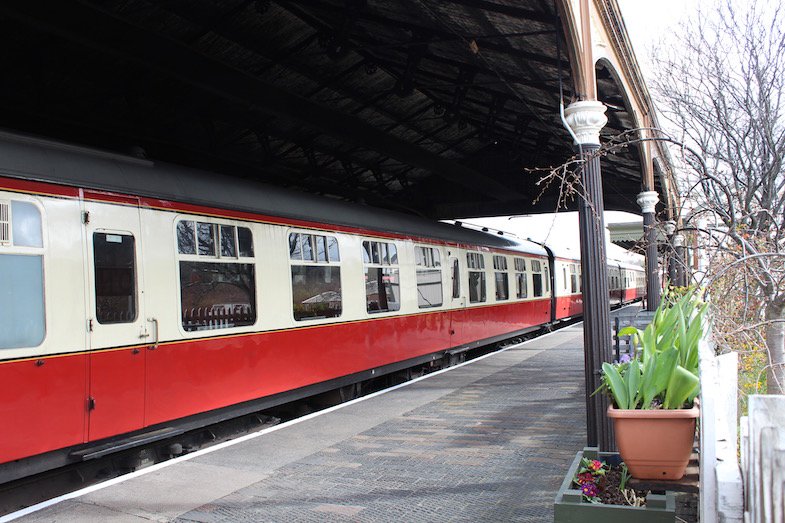 The formidable Outlander Blackness Castle, overlooking the Firth of Forth was the perfect choice as the show’s version of Fort William.

The castle was once used as a prison and a military fort and was built purely for defence. The courtyard was the setting for the horrific scene of Jamie’s whipping and where Claire and Jamie ran along the walls to escape. 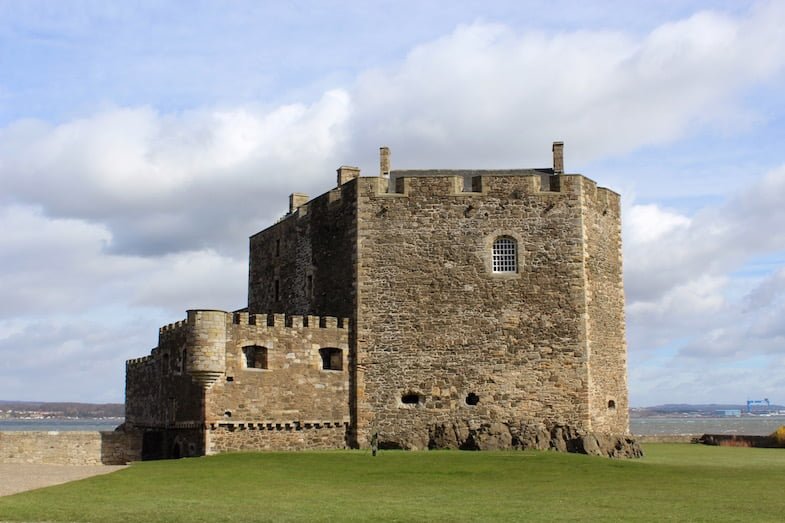 Yes, you can visit the home of Jamie at Lallyborch and see where he was flayed (whipped) at the archway.

This spot is usually very busy with tourists so you have to be patient!

The building cannot be accessed, only the exterior was used in filming Outlander, like many of the locations on the Outlander tours. 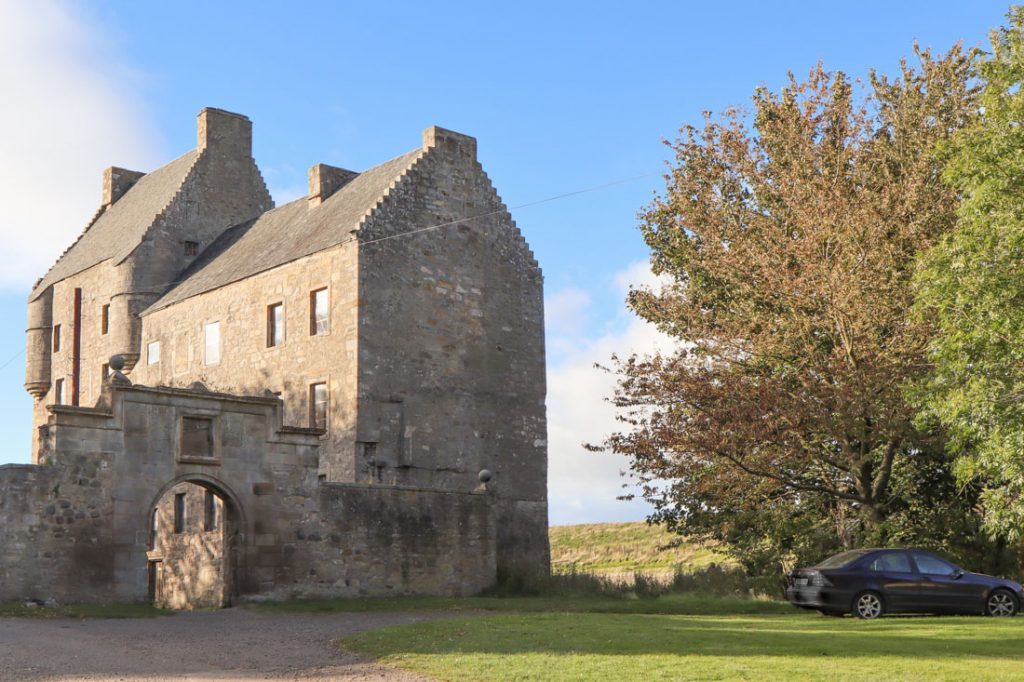 So where is Craigh na Dun? Unfortunately, it doesn’t exist, but you can see where it was filmed if you look hard enough.

On the long, winding road between Queens View, near Pitlochry, to the village of Kinloch Rannoch, you may spot the hill, with the trees.

The producers added the stones. I have travelled this road at least ten times since I knew of the filming and I’ve yet to find it but I know others have. I know it’s on the left-hand side, that’s about it, so if you happen to spot it let me know.

Glencoe is shown off beautifully at the very start at the opening credits and it’s the perfect place to truly see what makes Scotland so special.

If you ask any Scottish travel lover what their favourite place is in Scotland most will say Glencoe. The huge, majestic mountains tower above you as you travel through and the scenery around you is truly stunning.

» Looking to meet a man in a kilt? Here my guide on where to find them 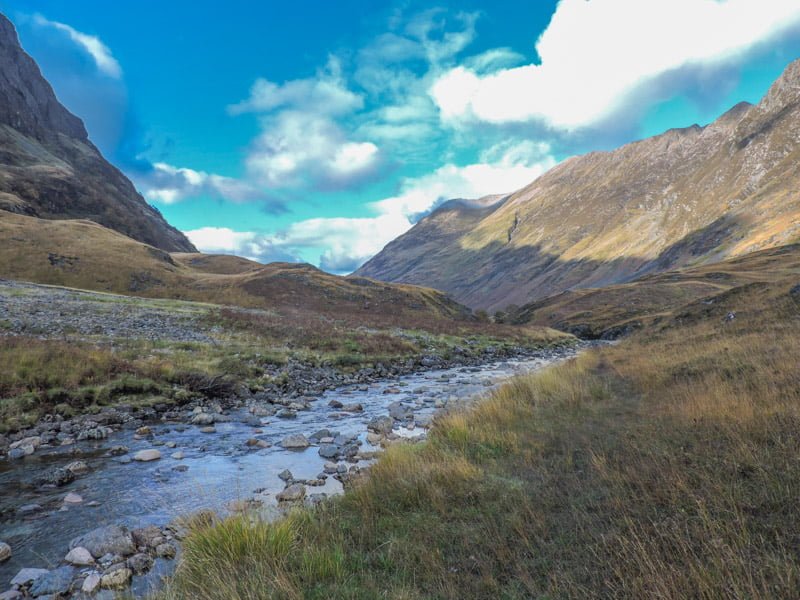 These locations are just the start. With more Outlander locations being added every year and Outlander Season 6 in discussion there will always be more.

You can download an Outlander locations map from Visit Scotland and why not consider an Outlander style wedding?! 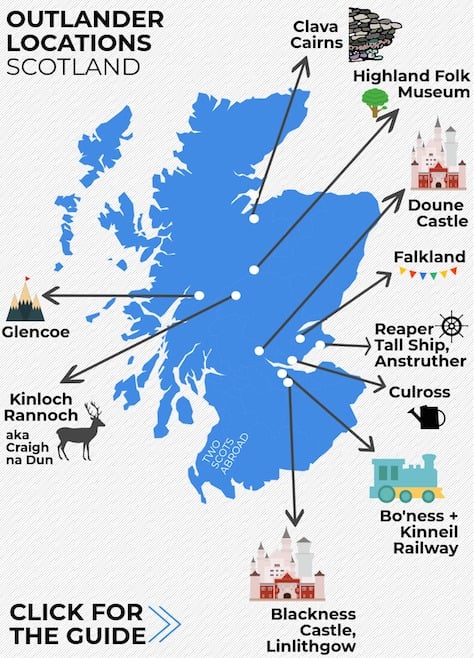 Are you an Outlander fan?

Tell us more in the comments below

» » Not found what you are looking for?
Here are all of the Outlander tours in Scotland  « «

This Outlander tour review is a collaboration with Gemma (Two Scots Abroad) and Nicola (FunkyEllas Travel). Nicola is a Scottish Travel blogger from, you guessed it, Scotland. She likes to inspire people to visit with epic tales from around the country. Nicola explores with daughter and pup and loves nothing better than a forest walk, a castle ruin or a beautiful beach. She loves the outdoors, colourful villages, quirky places to stay and good food to eat. A little Outlander obsessed and thrilled that it’s being filmed in Scotland so she can visit the filming locations. She’s also over the moon that it’s promoting Scotland’s stunning scenery.