So what is SXSW? SXSW is an incredible ten-day programme of film, music and interactive shows which takes place every March in sunny Austin, Texas. The conference is attended by media and tech businesses, artists and party-goers who are looking to discover new talent, often for free.

In 2019, we opted for premium badges so we can now compare how to do SXSW for free against doing it like the industry types. Here’s your ultimate guide to SXSW with tips on bagging gratis food, booze, entry to SXSW free parties. As always, we discuss how much South by costs, what to pack and tips on how to get the best out of the fest.

After the virtual event in 2021, SXSW has announced in-person dates for 2022 kicking off March 11th and wrapping up March 20th.

SXSW or South by Southwest is an annual multi-media festival and conference which takes place every March in Austin, Texas for just under two weeks. The 10-day event is split into three sections, interactive, film and music.

You can expect the following:

What makes SXSW special is that the festival takes over the whole city. No space is safe. Many locals actually escape the city.

Participants can either pay for a badge, wristband, or, with a bit of effort, see gigs and events for free.

You can purchase badges for each theme or go platinum for primary access to all three. If you choose just the interactive or film or music badge you gain secondary priority access to the other two.

The event was broadcasted online and featured Willie Nelson as keynote and the following acts and talks.

The SXSW Connected TV app which hosted the event was available on Apple TV, Fire TV, Roku®, Samsung TV Plus, and Android TV.

SXSW 2020 was unfortunately cancelled due to COVID19.

SXSW events ran from March 4th until March 17th 2019. SXSW Edu kicked off the show on the 4th-7th, SXSW Interactive started on 8th-15th, SXSW Film ran from 8th-16th and SXSW Music, the last portion of the fortnight, ran from 12th-17th.

South by Southwest Line Up 2022

You might be surprised to hear this but the lineup for SX isn’t fully announced until the weekend before it starts.

The first big wave of acts/panellists tend to be announced around August/September but it is pretty much a guessing game until March and even then some artists have to pull out because of funding.

Don’t worry, we’ll explain how to create your own SX itinerary below.

Although Austin is the live music capital of the world, it’s not just about the music.

Previous artists and speakers have included big names like Chvrches (2019) and CEO of Tesler/SpaceX (2018).

However, SXSW is not about the known, it’s about the discovery of new talent from every genre.

Here are some of our top music acts/events from 2019. We were lucky enough to see some gigs twice.

SXSW was created to support artists and industry meet and discuss future partnerships. Those who are serious about networking should invest in the SXSW badge.

Badges give you access to all shows, talks, events and gigs in your chosen area (or access all areas for the platinum badge), you may still need to wait in line but not to the extent of those who enjoy SXSW by stalking the free events.

Even as badge holders, we’ve missed out of sessions and films because we missed the window to request a SXXpress Pass.

You do this through the SXSW Go app. It looks as if you have to request around 9 am the day before the event.

Another perk we’ve enjoyed as badge holders is the free daily drink at the Registrant Lounge. Here we’ve met interesting locals and visitors from a range of backgrounds including blockchain companies to gaming marketeers.

Here’s the difference between the four badges –

On this date, the online application allows the SXSW community to have a voice in what sessions are programmed at SXSW.

How To Do SXSW For Free [music, food and booze]

It’s universally known that you can visit Austin during SXSW just to take advantage of the free music shows, eats and drinks. Venues and gigs are sponsored by private companies and with sponsorship comes free shizzle!

Here’s how to get the best out of your free South by Southwest break. You will need a holiday after it.

Planning for SXSW starts months before the big event. Start stalking the bands and artists your love on social media to keep an eye on who is attending. You should also pay attention to SXSW Twitter accounts as well as venues in Austin.

During the festival, the following official and unofficial accounts will tell you where to get food, what the lines are like and where the surprise gigs are taking place. You might want to create a separate Twitter account to keep track of events.

During SX follow the hashtag #SXSW20 and hit the ‘latest’ tab for the most up to date news.

Also, pick up a copy of the Austin Chronicle paper for shows.

The Rules of Free SXSW Events

Our experience of 2019 was very different from that of 2015 and 2016. In the past, RSVPing was a must as stewards checked for the app tickets at the door.

Things have changed, as long as you wait in line and the venue isn’t at full capacity you might get in.

Again, keep an eye on those Twitter accounts to see where lines are doable, you need to be flexible at SXSW.

In 2019, there were heaps of ‘no badge, no problem’ signs, especially on Rainey Street. You will have to pay for your own drink at these ‘no badge’ events unless it is a sponsored party you’ve RSVPed to.

Waiting in line is just part of the SX bloodline. Even badge holders need to stand in line at times, albeit in the primary one. We waited for a good few hours, drinking our tins from the gas station, to try and catch Years and Years one evening.

We failed to get anywhere near the front. However, one of the best things about SX is that although full one day, you’ll get to see the artist the next at another venue.

We missed Har Mar Superstar on 6th but caught him in a tiny intimate venue the next day. He was basically dancing on top of us, naked.

Love the States? Check out our USA travel guide

Don’t expect free food and drink at every party. The free, like actual free, days will be the BIG parties held at the notable venues:

For Stubb’s BBQ you wait in line on guest list opening day to collect the passes then line to get in. Once the free beverages run out there are no more so get in early.

The Do512 app is useful but difficult to use. The best way to get around it is the search for the act you wish to see and pull up the venues that they are playing at then investigate which party that would be. Twitter is definitely the best app at your disposal and taxis apps will be required to get into the city and out.

SXSW Go is the official SX app. As badge holders, it has been useful for scheduling events and attempting to request SXXpress passes for popular events. Craig didn’t feel this app was much use as a non-badge attendee.

A charged phone is essential, pack an Anker battery charger US / UK too.

There are hundreds of venues at SX and the will literally pop up anywhere. Some of the most popular ones for free parties include:

Hotels and hostels prices hurt in Austin around SXSW. Be prepared to pay around three times the amount you would normally pay for a popular North American city and if you get in quick don’t be complacent.

We’ve now stayed with HI Hostel Austin twice in a private room. It is in the perfect location, 30-minute stroll along the water to the city.

Straight after our first SXSW stint, we checked into an airstream through Airbnb and in 2016 after being ditched by Drifter Jacks Hostel we booked an Airbnb miles away from the city resulting in a taxi every day but that’s the reality of accommodation options during SX.

We’ve had countless number of Airbnbs cancel on us when they’ve realized that the period we were trying to book was SX.

Straight after the festival prices drop, we stayed in a cute garden hut house at Barnton Springs and chilled by the swimming pool.

Uber, Lyft and Ride Austin all operate as taxis in Austin. Ride Austin is a nonprofit company fighting against Uber and Lyft operating in Austin and carries the slogan Keep Austin Local. It operates on an app basis like Lyft and Uber.

New to Austin is the electronic scooter system. Uber (Jump), Lyft and Bird all have scooters dotted around the city. You need the app and a credit card to activate the scooter.

I’m quite an anxious driver but using the scooters with ease. The traffic is very understanding (surprisingly). You can’t use the scooters on the sidewalks or down by the river. Stick to the cycle lanes when there are some.

Austin B-Cycle programme allows bike rental for up to 24 hours.

What Do You Wear to SXSW Conference

Anything goes but be comfortable. Expect some days to be hot and sticky, other is can rain (not that often though). The number one item on your packing list should be well worn in shoes for all the dashing between locations.

If you are there to network you should aim to stand out. Bright hair, cool hat? Whatever your bag is. Prepare your elevator speech before you go too. Don’t forget your business cards.

Don’t be put off by the queues, SXSW is an electric 10-day event bringing together the best of music, film, and interactive to one of the U.S’s hottest cities. Regardless if you are a badge goer or a free gig stalker I highly recommend adding SXSW to your bucket list for 2022.

Oh, and take your ID – you have to prove who you are (and that you are over 21) at every door.

It can be. There are plenty of free SXSW events around the city during the festival but the main point of SX is to connect clients with creatives and give companies the space to showcase their talent during the badge’s events.

SXSW or SX stands for South by Southwest. Apparently, it came from the movie North By Northwest.

How Long is South by Southwest?

The festival is officially ten days but there are events before and after if your liver can handle it.

Where are the Free SXSW Shows?

All over the city! On rooftops, in shops, in trucks, in theatres, and less surprisingly, in bars. Check out venues for an idea of some of the reliable venues.

Save to your Austin board 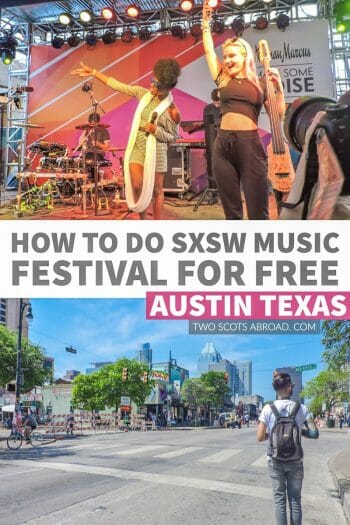 Are you going SXSW?
Let us know in the comments below