What does Bogotá in Colombia, Austin in Texas and The Kingdom of Fife in Scotland have in common? All three are misunderstood, undervalued as holiday destinations and now home to incredible street art! Fife, the region ‘over the water’ from Scotland’s capital, Edinburgh, is changing. The TV show, Outlander, has brought floods of fans over the Forth Bridges, the East Neuk charm has attracted more than just the St Andrews golfers and now the towns of Cowdenbeath, Glenrothes and Burntisland (amongst others), surprisingly, have something to spray – street art murals by the talented Fifer, Kerry Wilson.

Where is the Street Art in Fife?

This old mining town close to Dunfermline and Lochgelly is home to the untitled masterpiece of the boy dressed up in a mining hat and oversized boots. 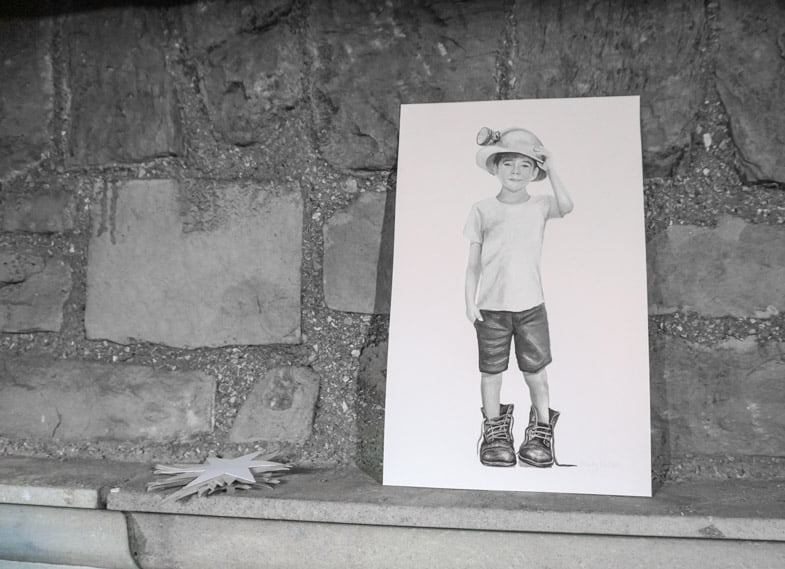 The mural took a couple of days to illustrate and seven days to complete onsite using 12-metre high scaffolding. This was the first time Kerry and partner, Gordon Forbes, had worked on a project this big and said the hardest part was physically getting onsite and then keeping the image to scale. During the illustration process, Gordon’s son was dragged in to model his arms, to ensure that the 13 metres high mural was realistic.

The idea was sparked a year ago in conjunction with Cowdenbeath Community Council who hoped for something that gave a nod to the roots of the town’s mining past. Kerry says, as unique as that sounds to an outsider, she gets requests to link to mining frequently. Hence this modern approach of the large mural, in keeping with the 32+ popular pieces found on gable ends in Glasgow.

When asked, ‘why the kid?’ Kerry responds – interpretation is up to the viewer, and before you ask why not a girl, Kerry will point you to the art on shop shutters where two girls feature. The gender choice was not on purpose, it just came naturally during the creation process.

Watch Kerry and Gordon in action

This is not self-indulgent art with a comment on politics and current affairs, it is community backed and celebrates society today. The mural is not Kerry’s first stint in Cowdenbeath. She has been working with pupils from Beath High School, sprucing up the high street with spray painted pieces on shop shutters such as the takeaway, hairdressers, and the card shop.

Initially, different pupils helped but eventually the die-hard cohort stuck with it, keeping Kerry’s morale up at times and being excellent apprentices so much so two members of the team were awarded the Cowdenbeath Young Citizen of the Year award (Lee Crawford and Isla Cattanach).

Where to Find it and What’s around?

The mural of the mining boy is found on the end of a building at Brunton Square closest to the A92 end of Cowdenbeath Beath High Street and the shutters can be found on the street when the shops are closed.

Cowdenbeath Leisure Centre is the main attraction in the town. The centre includes gym facilities, a swimming pool, football pitches, fitness classes and kids clubs. In contrast, I can recommend the sit-down chippy, Darios. Racewell is home to stock car races, races take place every Saturday night from March to October.

Lochgelly is five minutes away from Cowdenbeath where you will find the modern Lochgelly Centre has a 412-seat theatre, studio theatre, art studios, gym, rooms to rent and Lily’s cafe. Car sports enthusiasts should check out Driftland, the first purpose Japanese style drifting arena.

Next to Lochgelly is Lochore Meadows Country Park AKA The Meadies. The Meadies has walking and cycling routes, water sports, and a 9-hole golf course. During the summer, events such as the music festival Rockore, Bark in the Park and Pipe Band competitions take place.

15 minutes away from Cowdenbeath is Dunfermline, Scotland’s old capital, also has a public park (with peacocks!), Pittencrieff Park/The Glen, the impressive Dunfermline Carnegie Museum, the Andrew Carnegie Birthplace Museum, Dunfermline Abbey, live shows at the Alhambra and a variety of pubs, restaurants and a decent music scene.

Read more: things to do in the Kingdom of Fife

The Macedonia Mobile AKA The Maci Selfie is hidden within the area of Macedonia. The hand taking a photograph with a mobile phone brightens up a drab underpass, notoriously not the nicest of things to walk through. This mural was created in conjunction with the community Golden Glenrothes Charrette events and aimed to create a visual talking point.

While taking photos of the person taking photos, we asked a local what they thought of the work. All positive remarks, she reckoned it’s great for the area and better than the tagging (names) you normally see. Interestingly, during our trip to Colombia, we discovered that the Bogota street artists didn’t mind tagging as it was seen as a ‘way in’ to street art.

Kerry completed this mural with the help of her 16-year old apprentice, local resident Rose Shields. It took over two days and the challenges including drawing hands for the first time and working those angular walls of the underpass!

Where is it and What’s Around?

If you head to Glenwood Health Centre and park up, the underpass is across from the health centre.

Glenrothes has a park called the Riverside Park (where you can see Kerry’s early community art project, the mosaic under the park bridge created in 2012 with over 200 participants from community members to passersby!), the Glenrothes Kino (cinema) is half the price of the Odeon in Dunfermline, and the Michael Woods Leisure Centre is equipped with gym facilities and a 25 metre swimming pool. Glenrothes is 30 minutes away from the East Neuk which leads to St Andrews. 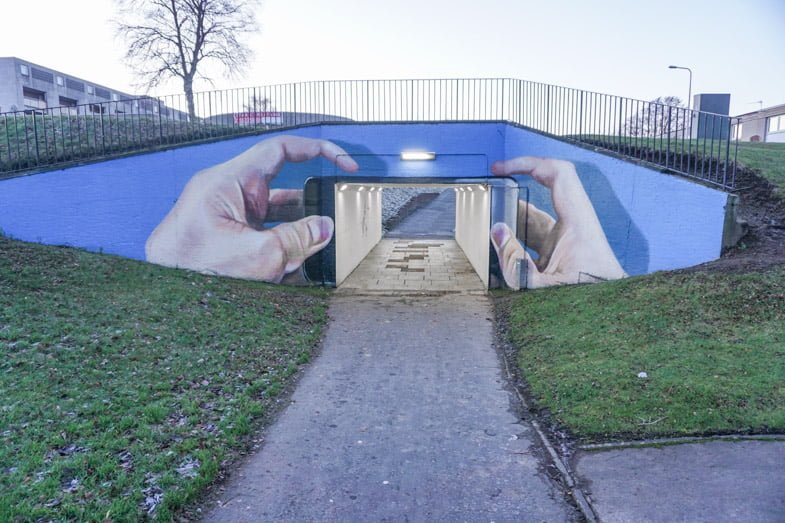 Burntisland is my hometown, once the hottest holiday destination for Glaswegians, still home to the summer ‘shows’ (fairground), beach, and the Binn hill.

Burntisland also has the Beacon Leisure Centre, football pitches and an ‘amazing’ skate park, according to my friend and Scottish cyclist, Robert Wardell (from Dunfermline). It’s is rite of passage to get a chippy in the Bizza and now an ice-cream at the parlour.

The skate park is where Kerry’s next mural is and this was developed in 2016 with local young people delivered by Kirkcaldy and Burntisland Detached Youth Work Team.

Kerry was not in control of this project; the planning, styles and design were all discussed and voted on by the young members of the team. The biggest challenge was working on the curves of the skate park but the end project is deemed a much-improved site than the previous graffiti!

Although a talented mural artists, this was never intended as a full-time profession. In fact, the first time she put her hand to spray painting was while working as a Fife Council youth worker on a project with the kids and Glasgow based artist, Amy Whiten from Recoat.

However, it’s in her blood. After school, Kerry attended an illustration course for two years at Fife College then trained as a graphic designer in Edinburgh before heading back to study multimedia this time, at Abertay University. Whilst doing her degree at Abertay she also worked as a youth worker, committing to youth work for eight years. During this part of her career, she was reunited with art, a creative full circle if you like.

Kerry has also completed art projects in Cupar, a variety of Fife schools and community centres. Kerry’s art studio looks like the set of a vintage fashion shoot and luckily for you she will be offering courses from the studio at Sailors Walk, High Street (Kirkcaldy) in the near future.

There is a downside to being a (recently new) full-time artist, she says people think you’ve got a cushty life sitting about in your pyjamas painting all day but the reality is, it can get lonely.

Kerry would like to connect with other artists in Fife so if you’re out there she wants to create a collective and I want to photograph what you come up with. 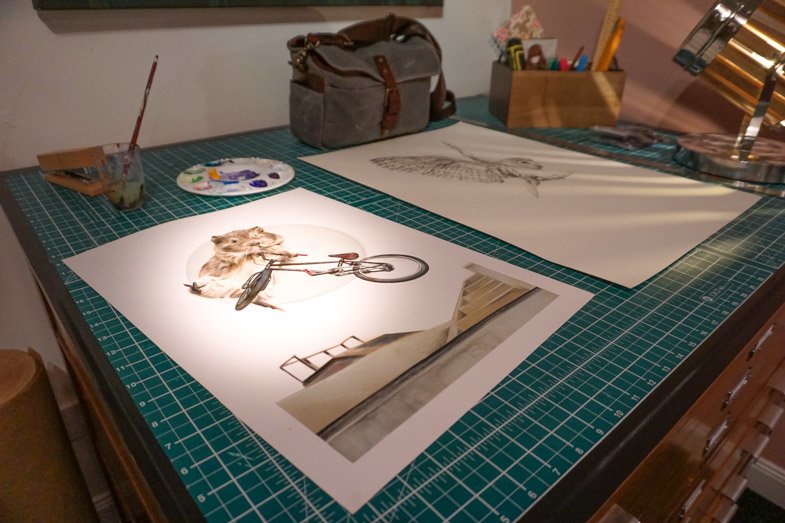 Kerry doesn’t think street art should be controversial, she believes that it should be in keeping with its surroundings and make people happy. It sure does put a smile on my face to see Fife on the map of Scotland’s street art trail to boost Scottish tourism.

You can find out more and keep up to date with Kerry Wilson’s projects at her website, Instagram and Facebook. She works on private commissions as well as public so if you have a space you would like to add a bit of interest to, get in contact with Kerry.

When you visit the street art murals in Cowdenbeath, Glenrothes and Burntisland, remember to use #LoveFife on your social shares.

What does street art mean to you?

Like Kerry’s mural, this article was commissioned by Fife Council. I’m proud to come from a county who supports its young creative citizens. Regardless of who is footing the bill, my honest opinion, as always. Kerry really is as radge as she sounds, was a pleasure to interview her.