During our epic sabbatical to travel the Americas and Europe it was inevitable one of us was going to sick. After eight months of travel, it was me, Gemma, who needed to make an appointment at the doctors. 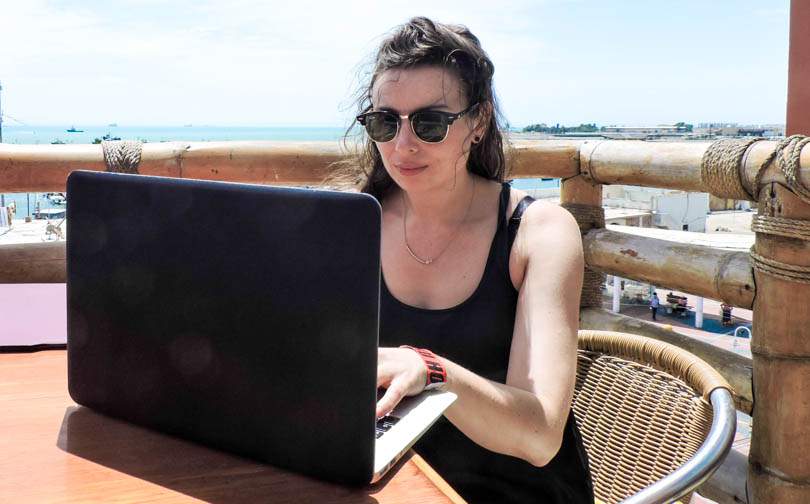 Blogging in Peru – grabbing Wi-Fi when I can!

Pretty soon after I started feeling dizzy I developed a cold, so I put the light-headiness down to the sniffles. A week, and lots of tangerines later, the flu had flitted but I was left feeling off-balance whenever I looked up or lay down.

Jokes about pregnancy then followed as the dizziness began soon after our engagement. Thankfully there will be no tag along on this trip. Two Scots Abroad and a Bairn doesn’t have the same ring to it.

Another fortnight passed and my medic friends suggested/instructed that I got checked out. Naturally, I assumed the worst.

Going to the Doctors Abroad

In Canada, visiting patients can expect to pay $100 CAD when attending a ‘walk-in’ clinic. I had to take my passport along for identification. As I sat nervously in the waiting room, freeloading the wifi, my friend, Karen, advised me that London Drugs (similar to Boots or Superdrug) offered free blood pressure checks.

This was one of the possible causes of dizziness. Not wanting to waste £50, I asked the receptionist for a refund and headed into town.

Alas, the blood pressure machine returned a healthy result so it was back to the doctors to sheepishly hand back the $100! The receptionist was very understanding of my cheapness which was reassuring.

After twenty minutes of waiting (walk-ins work on a first-come, first-served basis but if the queue is long they’ll give you a time slot), I was asked to sit in another room. In this room, I was faced with an advertisement that told me at the age of 30 my skin is sagging and I should consider surgery. You don’t get that on the NHS!

I’m glad I attended the appointment. Dr Ho was very thorough in her checks. She took my blood pressure and heart rate lying down and then again while sitting up.

She tested my eyes, grip, response time, ears, and felt my head and neck. The diagnosis wasn’t an inner ear infection like my mum had predicted. Dr Ho advised me that it wasn’t brain-related which is what I wanted to hear. Relieved, but I wasn’t expecting the diagnosis to be…

My diagnosis was vertigo from cervical spine strain caused by poor posture which is making me dizzy.

The way I’ve been sitting over the laptop for eight hours every day has finally made me ill.

I’ve cycled the Death Road in Bolivia, dived in the waters of Cuba, hiked to 4650 feet above sea level in Peru yet who would have thought that it is BLOGGING that would finally make me ill?!

Dr Ho prescribed yoga and a referral for physiotherapy. 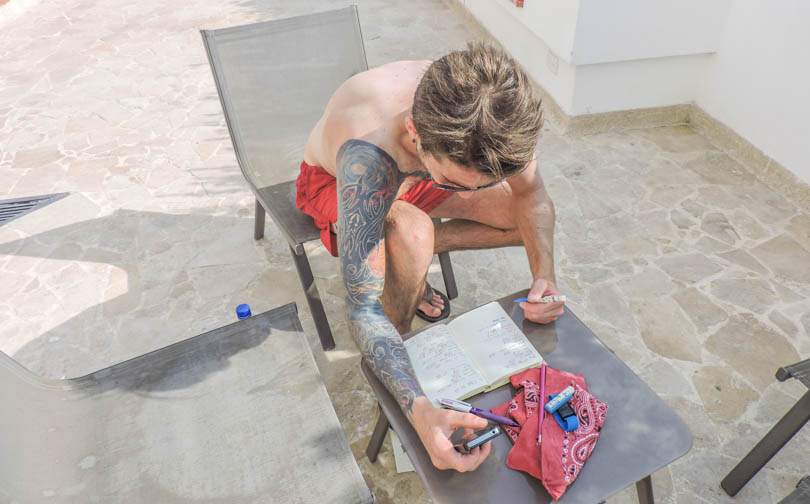 Naturally, I got home and did my own research online.

Turns out ‘bloggers position’ is a thing, as is ‘texter’s position’ so even though you are not a blogger, you still need to consider that you are straining your neck every time you stare down at your smartphone! 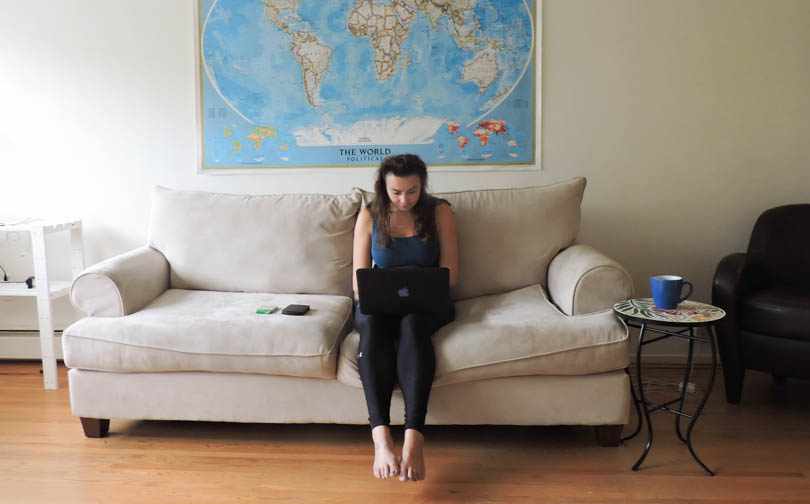 I am now starting the day with some yoga stretches (I go to the gym most days, Dr Ho was actually surprised that I had little pain in my neck and that I managed the gym with no struggle).

I found Chopra’s advice helpful and have been doing the following:

Less than a week later (no waiting lines when you pay directly for health care!) I visited Treloar Physiotherapy (8th Avenue) where, after a couple of forms and physical tests, Penny came to a surprising conclusion.

I had ear crystals.

Ear crystals are not caused by blogging! Slightly confused by my initial examination with Dr Ho, Penny explained that ear crystals or Benign Paroxysmal Positional Vertigo (BBPV) sometimes has no cause.

However, the stiff neck and shoulders are likely to be linked to poor posture caused by being a slave to the keys.

We did some freaky body movements officially called the Epley Manoeuvre which uses gravity to get the ear crystals moving again.

In simple terms, the ear crystals (or rocks) were supposed to be moving and disintegrating but they were stuck.

Doctor Ho wasn’t to know, the crystals live in the vestibular system which is even further embedded into your skull than your inner ear.

Penny suggested a follow-up appointment to check on the dizziness (which should lessen this week) and work on my neck and shoulders. 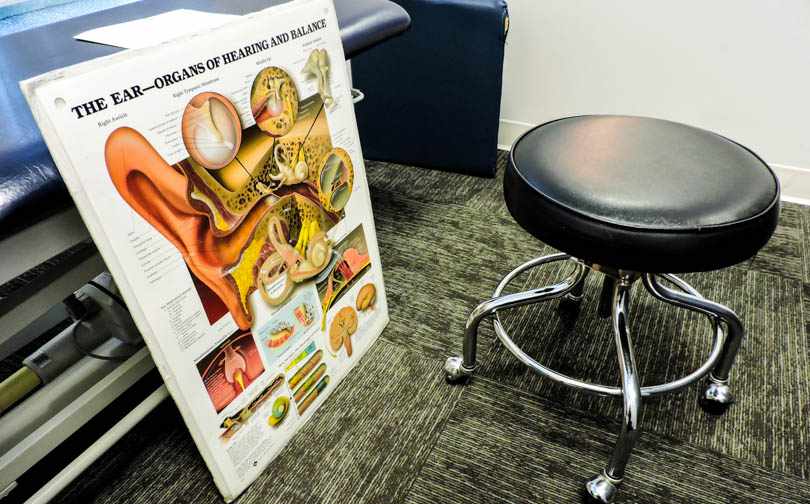 I shopped around for travel insurance before we left.

I am not the type of person who would risk winging it, in fact, I’m the polar opposite of that person.

We finally decided on True Traveller because it recommended from a friend who had claimed for money back whilst in Australia.

The customer service team answered all of my many questions, and True Traveller could provide coverage for high altitudes which was required for our trek to Machu Picchu.

Unfortunately, claims have a minimum requirement of £75 but the walk-in cost was only £50.

The company put me in contact with CSAL who process claims and they have reassured me that they will consider combining the walk-in fee with the referred physiotherapy ($100 too).

Naturally, I’ve kept the receipts and the referral as evidence. Check out their rates here to see if they are the travel insurer for you too.

The End of my Short-Lived Blogging Career?

I’m not going to stop blogging, I need the focus and I enjoy the daily challenge that it brings.

Plus, I don’t want you guys to miss out on our 2016 itinerary – Portland, Seattle, Orlando, Nicaragua, Costa Rica, Austin, NYC, then whatever Europe brings in April!

The blog is now 14 months old, eventually all of those hours cooped up over the MacBook was going to take its toll and the price I’ve paid is a pain in the neck!

Heads up (literally!) Smartphone and computer users are aware of your posture.

Minimise your time typing/texting from the sofa or in bed (as comfy as it is, a nice perk of blogging!) Opt for an office style set up. Use a desk/table and have a well-positioned seat where your body can relax.

Take breaks, before you break something! If you do find yourself ill on the road, do get it checked out (Dr Google is not prescribed) and most importantly – get travel insurance!

If you do find yourself physically or mentally down on the road, check out these motivational quotes to perk you back up again – it’s a lovely world out there!

Have you been sick on the road?

18 thoughts on “Getting Sick in Vancouver”