Vietnam was the second country on our five week Southeast Asia itinerary. We (Craig and I) had spent a luxurious four days in Singapore, sipping ‘Slings and swimming in rooftop pools, but the backpacker in me was yearning for something more ‘foreign’ and Hanoi, Vietnam’s capital, certainly provided that. However don’t fear the unknown, here are first timer visitor tips for Hanoi and the picturesque Halong Bay.

Things to do in Hanoi

Hanoi is like one of those annoying friends you just can’t shake. You let them stick around because they are not only fun but also the gateway to other opportunities. However, man alive, they are loud and imposing.

Hoàn Kiếm Lake, also known as, Hồ Gươm, feels like the lungs of Hanoi. Escape the zooms and fumes by taking a wander around the pretty green spot.

There is an opportunity to buy a coffee, some food or ice cream around the lake too.

Be warned – just because an area of the city map is marked in green, it does not mean that it is a park.

Craig and I ended up at the equivalent of the Ministry of Defence, men with guns shooed us off *TAXI*!

Another refreshing area is Hanoi’s West Lake, not just for the 17 km (about 10.6 miles) freshwater lake but also for the restaurants in the cool area.

Watch the sun set from Summit Lounge, but stick around for dark to see the city lights sparkle.

The Vietnam Military History Museum has artefacts, weapons, and displays information on the 1954–1973 Vietnamese war.

Some of the weapons are Soviet and Chinese weapons which were captured during the war. The museum also holds French and US-made weapons.

Visitors can also see the American Presidential candidate, John McCain’s uniform which hangs up in a glass cabinet at Hỏa Lò Prison.

McCain was a prisoner of war who spent time in the notorious Hanoi Hilton with other American prisoners of war.

A pretty authentic way to to see Hanoi attractions is with Hanoi and its culture is to take a free tour with a young person who lives in Hanoi.

This is organised by the not-for-profit company, Hanoi Free Tour Guides.

Highly recommended on Trip Advisor Hanoi, this looked like a great idea but unfortunately, our guide did not turn up!

This is for the brave only! There a couple of guided moped tours or the chance to hire mopeds in Hanoi.

Craig’s friend, Iain, lives in Hanoi so he picked us up on his (along with another friend).

I managed to burn my ankle (so painful) while getting off the bike so be careful! One of the Hanoi activities I would be avoiding in future!

How to Eat Local Food in Hanoi

There are plenty of Western-style cafes and restaurants in Hanoi but where is the fun in that?

Local food in Hanoi is consumed a tad different to what we are accustomed to the rest of the world!

Each vendor sells one meal (and maybe another variation) so you have to work out where ‘pork corner’ is or ‘chicken street’ depending on what you’d like for your dinner.

Customers sit on a small child-like plastic chair and the server brings the super fresh fast food over. I tried a dumpling starter and a tasty soup with meat and noodles for main, all washed down with cheap local beer!

Don’t do as Craig did – he advised the server we had not ordered yet when they initially brought our meal over!

According to our Vietnamese friend, Nhung, there are certain restaurants which serve our four-legged furry friends, dogs.

We did not see any but she says that it is actually tasty!

The process in which the dogs are killed is pretty inhumane, regardless of being raised as farm animals as opposed to pets.

The sweat is battered out of them before skinning and cooking.

Do not be alarmed if a Vietnamese man (of any age) comes up to you to tell you that they like your tattoos, or that you think you are handsome or shout Alex Ferguson (big Manchester United fans) at you – this man to man admiration is typical in Vietnam.

I felt like I was travelling with a celebrity while strolling the streets with Craig.

You will probably be pretty keen to leave Hanoi after a day or two and the place to head to is Halong Bay.

Stumbling across Halong Bay pictures was the draw to Vietnam for me.

However, in the end, hiking through Sapa Valley was the highlight.

The most popular way to visit Halong Bay is by tour but you can do it independently too.

There is a three-hour bus from the city to the shore which you can book in advance here.

There are a variety of ways to visit the limestone lined waters of Ha Long Bay, which is located in the Gulf of Tonkin.

If you are short of time there are Halong Bay day trips as a group ($25+ per person) or private tours ($45+). If you are looking to stay overnight on a boat and/or one of the private islands around Halong Bay, there are tour companies which also offer this.

We chose a group trip with Halong Bay Castaway Tour, which actually put us off party boats (but not group tours, had an incredible long weekend with West Trek Tours in Canada) for the rest of our travelling career!

The guides weren’t great (one lost my head torch while trying to find a traveller who apparently dived into the water at night), they couldn’t really tell you much about the area but could definitely show you where the bar was.

To add to this, the kayaks were crap. Craig nearly killed himself trying to save a sinking boat for another traveller since they were going to be charged a fee.

It was a learning curve but don’t just take my view on the trip, Janet from Journalist on the Run provides is far more balanced review of the 3 days/2 nights Castaway Island trip.

Our Irish friends were advised that there was a public boat leaving early doors on day three for 2700 dong / 12 cents so we decided to join them.

We took a small boat to the dock, then a larger boat left once it was full of people, animal in cages and mopeds!

Getting to Hanoi – Vietnam Visa

There was no method to the madness at the visa area in Hanoi airport. We paid $14 each (online) before entering then $45 each for visas (take passport photos and be prepared to queue).

Hotels in Hanoi are relatively cheap, with a double room starting at £8! Hostel dorms are naturally cheaper at £2 per night.

The average Airbnb ‘entire home’ is £41 per night but do start at £17 (for a decent apartment).

We stayed at Hanoi Backpackers as this is who we booked our tours with. On arrival, they sent us in a taxi to the newer hostel as they were full.

The room was clean, the bar was busy. By the end of our time in Hanoi, we really weren’t in love with the hostel or the staff. It’s the place to stay in Hanoi so the staff can safely live off that hype.

Vietnam uses dong. Be prepared to feel like a millionaire going to the ATM! For the most up to date rates, see here.

Both Hanoi and Halong Bay are prone to storms and heavy downfalls which may cause you tour provider to cancel the Halong Bay tour.

The warm season starts in May and ends in October with the hottest day (in June) reaching highs of 34 degrees. December to March sees the cold season, coldest temperature quoted at 19 degrees.

Thunderstorms are most likely in June, July, August. However, we travelled around the north of Vietnam in July with no issues.

Hanoi was definitely interesting! The food was fresh and healthy, the people were super friendly (to Craig!) and Halong Bay was beautiful. However, I won’t be rushing back to Hanoi – or Hanoi’ing as the Irish coined it.

Heading to the elsewhere? See my friend Will The Broke Backpacker’s guide to backpacking around Vietnam. 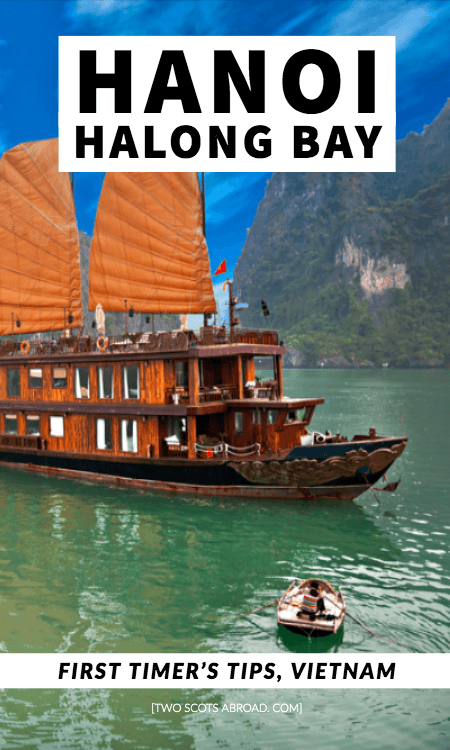 Have you been to Hanoi or Halong Bay?
Any questions, pop them into the comments below and I’ll get back to you in a jiffy!