Too many guides on things to do in Vancouver at night fob you off with a list of restaurants to dine at, and while Vancouver does have a vibrant cuisine scene we (Gemma and Craig) think that’s lame advice when there are so many things going on after sundown. Here’s our guide to Vancouver at night, for all seasons. Did we leave anything out? Tell us in the comments below.

What to do in Vancouver at Night

Fancy a movie? Although the Rio Theatre was initially built in the 1930s, it has all the mod cons of a 21st-century movie house.

If you drink, you can purchase alcohol at the Rio and enjoy your movie with a beer, wine, cider or cocktail.

Love it or hate it, Granville Street is the main drag for bars and clubs in Vancouver’s city centre.

You can find anything from craft beers to cocktails, Irish bars to games on TV. There are even a few music venues jammed amongst the mayhem.

We were sitting outside having a pub meal one night and across the road from us someone used bear spray on another guy. Not something you forget!

I wouldn’t advise staying on Granville Street. Here’s our guide to the best places to stay. 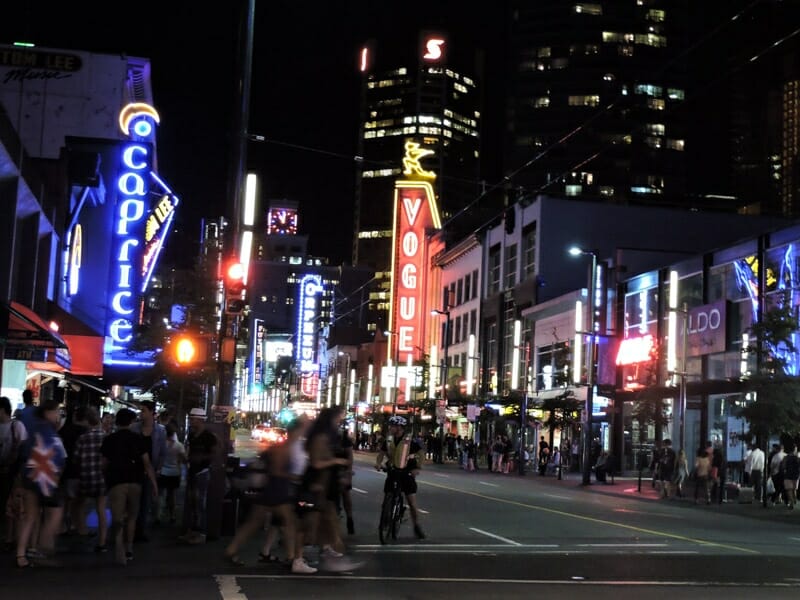 Looking for live music? Check out the lineup at the Commodore Ballroom, Queen Elizabeth Theatre and the Imperial.

Be careful at night, Vancouver is super friendly but it is a city. Craig was mugged after leaving the Imperial.

He returned home covered in blood which is not a pleasant experience to wake up to.

Check the above event spaces for updates. I’ve linked to their Facebook pages above.

There are eight ice rinks in Vancouver and some of these are not seasonal.

Head to Britannia Rink on Napier for all year round skating. You can hire skates there, just remember to wear something warmish.

Catch or watch a Canadian Football team, BC Lions the BC Place Stadium. 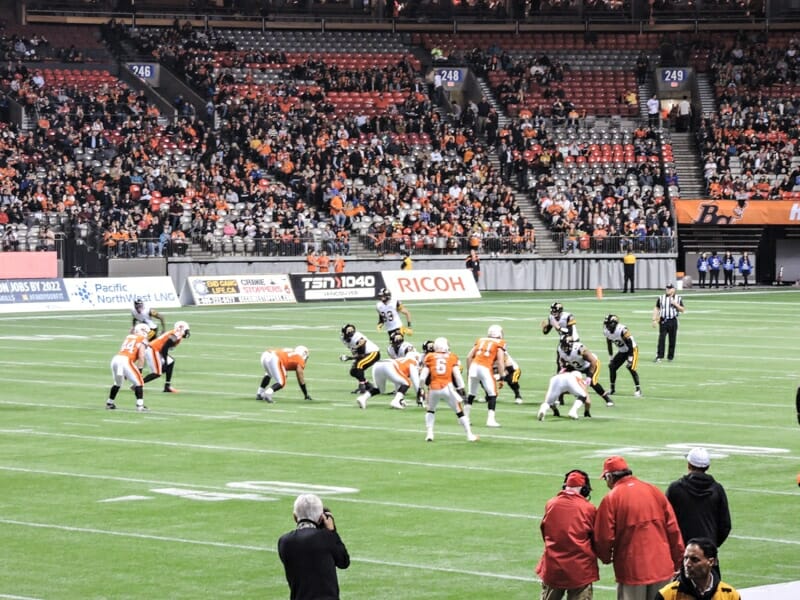 Come on, it is Canada!

What do unicorns, Scottish shortbread and hashtags all have in common?

They’ve been used in an Off The Grid Waffle freakshake. Open late and looking great.

Craig fully immersed himself in the craft beer scene in Vancouver.

I’d go as far as to say his six months of drinking Ruby Tears (Parallel 49) ruined drinking for him back in Scotland, as although the scene is improving, it certainly hasn’t hit every pub, yet.

Do an independent tour of the craft beer bars up Main Street or take a brewery tour and learn from the experts.

Hire a kayak or paddleboard and drift with the sun going down. Therapeutic! One of the many outdoor activities in Vancouver that are a great de-stresser. 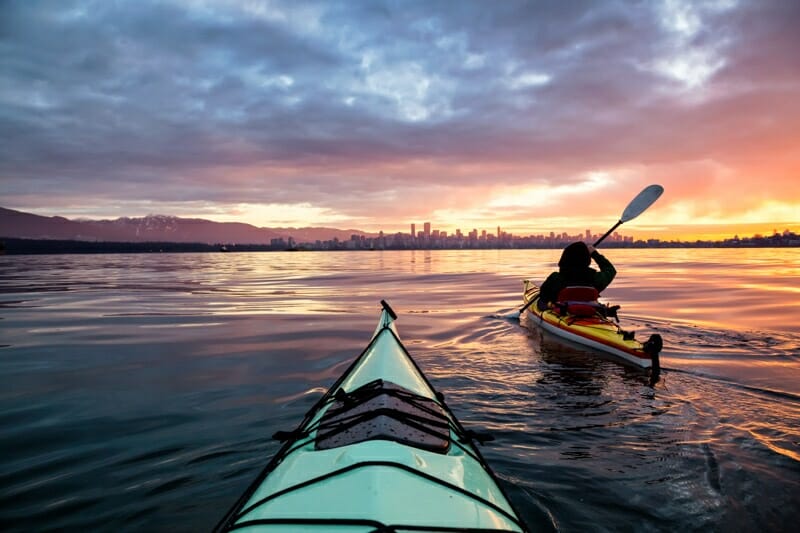 See the stars and learn about Mars at the evening events hosted by the H.R Macmillan Space Centre.

This is actually where Craig proposed to me!

Yoga is a massive part of Vancouver life. At Karma Teachers yoga classes you pay donations as the teachers are in training. One of the cheaper indoor activities in Vancouver.

I did a morning class in the very light and welcoming studio but there are evening classes if you need to unwind and stretch after a full day.

On Canada Day (July 1st), you can view the fireworks at night from up there too.

Take a walking tour through the Victorian buildings of Gastown and learn some dark stories about intriguing Vancouverites.

Play games and drink beer (or not) at Pub 340 Pinball Arcade on Cambie Street. 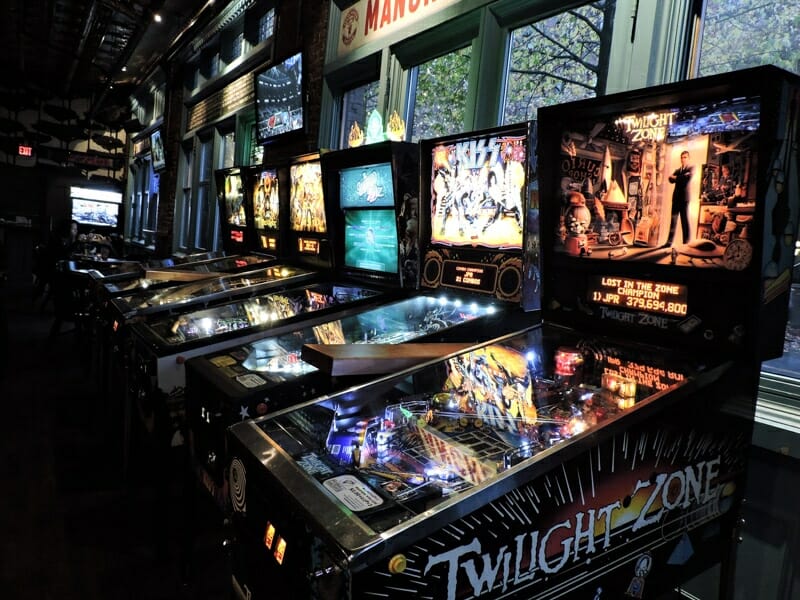 It doesn’t matter what night of the week it is, there is a trivia quiz going down somewhere in Van! Check out this extensive list for more details.

Watch out of the lineup at the Vogue Theatre, Pacific Theatre and Queen Elizabeth Theatre for festive shows including the Nutcracker ballet. 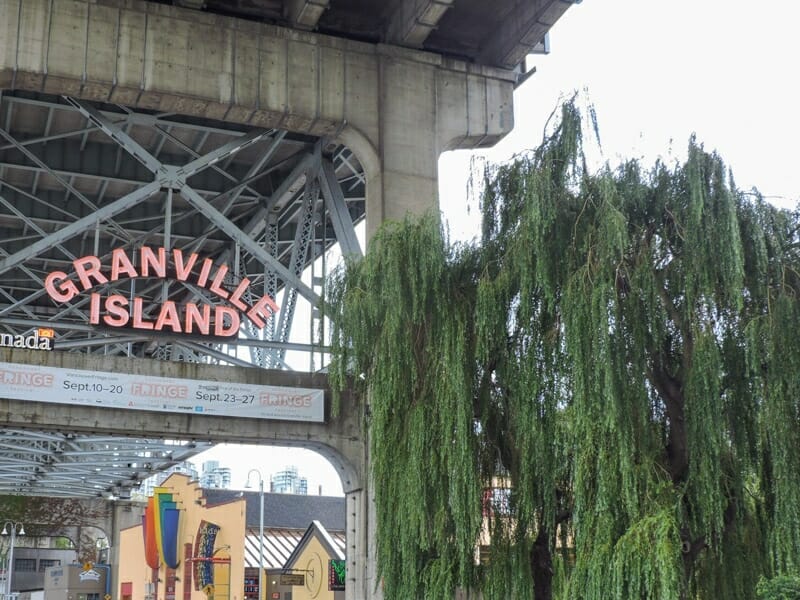 Mini waffles sprinkled with sugar, cooked with falvour or piled with fruit and cream.

Things to do in Vancouver at Night in Summer

If you visit during summer, be sure to check out the Stanley Park outdoor cinema. Pack some chairs, snacks and a top for later.

Note: it is not advised to go to Stanley Park alone in the dark.

This is the largest night market in North America and may also be the busiest!

On weekends during the summer months, Richmonds Night Market is packed with stalls with food from all over the world. There is also entertainment on the stage and games to be played.

Second Beach Swimming Pool in Stanley Park is open until 8:30 pm during the spring and summer months. There’s even heating! 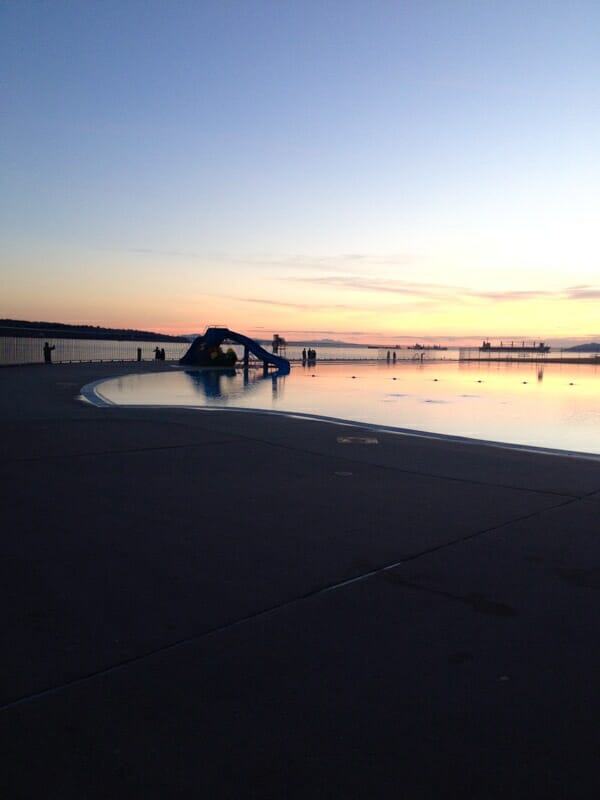 Kitsilano swimming pool, North American’s longest saltwater pool, has just been renovated and is open late during the spring and summer months.

One of the free things to do in Vancouver involves taking a stroll along Main Street to check out the street art murals.

Thanks to Vancouver Mural Festival and local artists there is lots of work to look at. Here’s the map.

For a full week in July, fireworks take over the skies in Vancouver at the Honda Celebration of Light.

It is the longest offshore fireworks competition which promises a bang.

For nearly three decades, countries have been competing for the best light show over English Bay.

We joined the masses at the bottom of Davie Street as English Bay was too busy. Arrive early to avoid disappointment.

Grouse Mountain is open until 10 pm so you can enjoy nature with fewer crowds.

During summer there is the Rusty Nail BBQ for dining, as well as other all-season options. 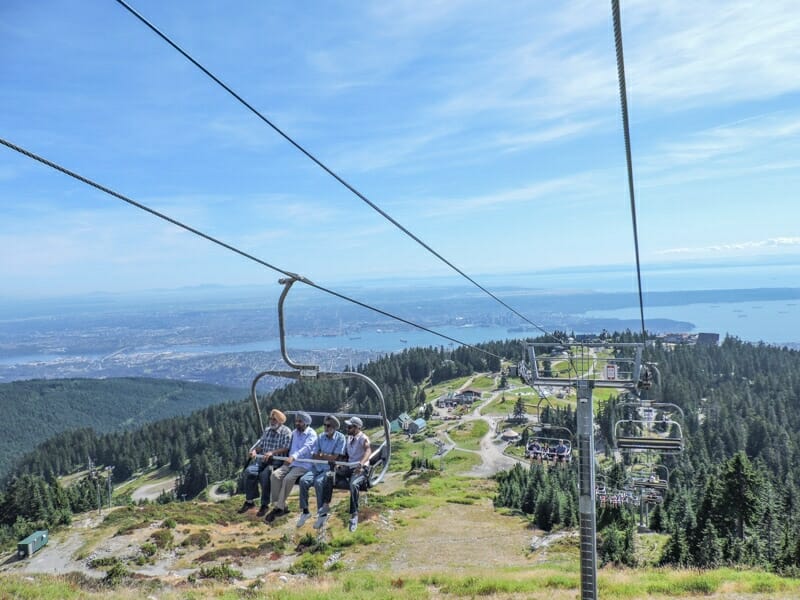 Quite a romantic way to spend an evening in Vancouver!

Enjoy live music and a Pacific Coast cuisine buffet while you sail by Canada Place, the North Shore Mountains and the West Vancouver skyline after dusk. Check out the 5* reviews here.

One of the biggest summer events in Vancouver is the Vancouver International Jazz Festival.

For 12 days, 500,000 jazz fans listen to nearly 2,000 artists over 300 concerts in the city. Headliners have included Tony Bennett and Lady Gaga, Erykah Badu, and Buddy Guy.

Hands up! This is not a summer-specific activity to do in Vancouver but lighter nights give you more freedom to see this public art exhibition.

Most notably, Giants by OSGEMEOS (Brazil) and A-maze-ing Laughter, Yue Minjun (China). Get amongst the art, take photos and tag @van_biennale. Here’s the map.

As mentioned previously, there have been police warnings not to enter Stanley Park alone at night. 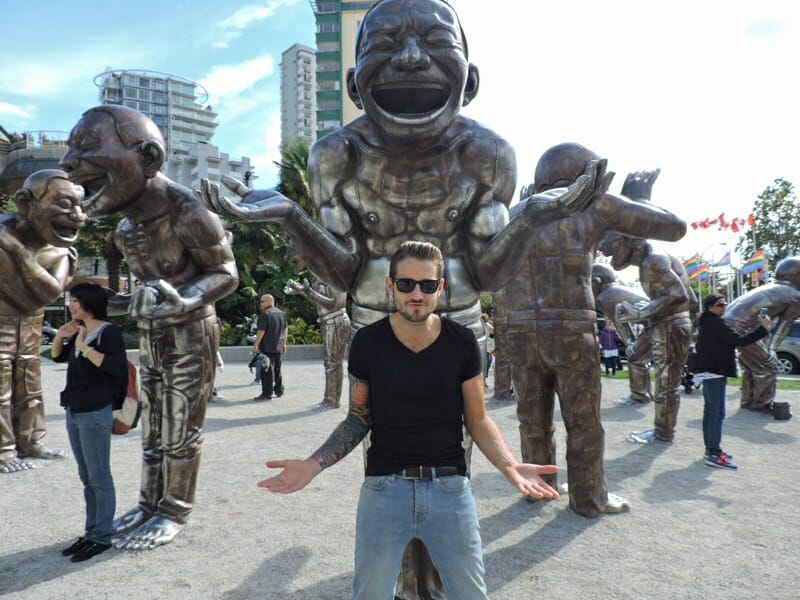 Head to Jericho Beach for the Vancouver Folk Musical Festival in July to hear local talent and international big names.

Looking to learn? There are workshops as well as concerts.

Vancouver at Night Activities in Winter

From November to January, Capilano Suspension Bridge Park becomes illuminated with hundreds of thousands of lights.

I do have to warn you that this festive event is really busy and can be unpleasant if you don’t like crowds.

There are free shuttle buses from Downtown Vancouver.

It’s not Whistler, but Vancouver does have its mountain called Cypress.

During winter, the trails are lit up for night skiing.

Don’t fancy skiing or boarding? Snowshoeing is an easy sport where cramps are attached to your shoes (make sure they are waterproof).

The last tickets are sold two hours before sunset.

Cypress has all the fun activities in winter! Kids and big kids who love a thrill can fly down Gnarly’s tube park.

There’s also a JFL Movies segment for those who want a night in with popular Hollywood comedians.

Capilano is not the only light show in Vancouver!

Grouse Mountains gets you to whack on your snowshoes and cleats to discover its enchanting lit up snow alleys and pathways around Blue Grouse Lake.

37. Festival of Lights at the VanDusen Botanical Garden

Choir songs fill the air and the warm glow from the installations light up kids rosy faces, what else says Christmas than the Festival of Lights at the Botanics in December?

Note: this winter event gets extremely busy. It is advised to use public transport and be prepared to wait in line. 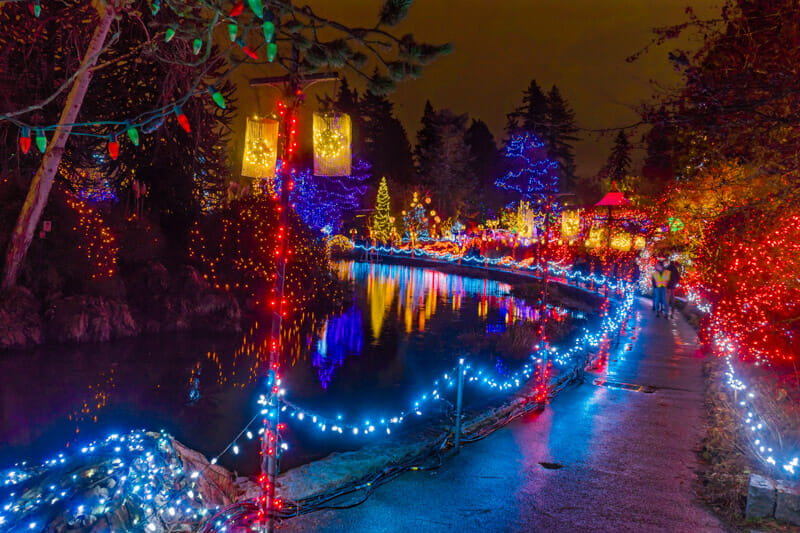 The market is packed with 80 Christmas huts resembling a German Christmas market. Local choirs entertain visitors while they sip on hot drinks in festive mugs. 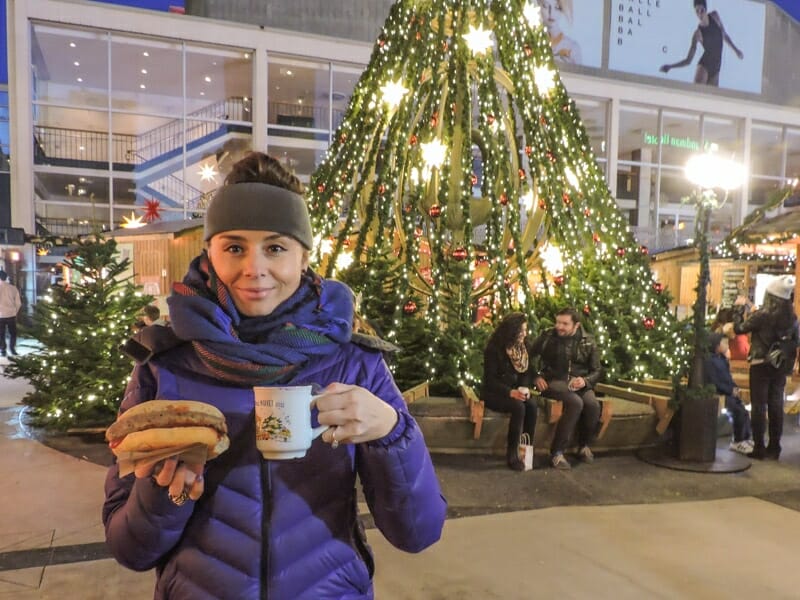 Christmas trees, lights trails and of course, the big man himself, Father Christmas!

The Burnaby Village Museum cranks Christmas up to another level during the festive period. Visitors can bake in the Farmhouse, listen to live music and ride the indoor carousel.

One of the most popular festive things to do with kids at night during winter in Vancouver.

I have never seen anything like the Christmas experience at Hycroft Manor.

Looking to do some Christmas shopping? Hycroft has the longest-running fair selling craft from local makers and artisans. 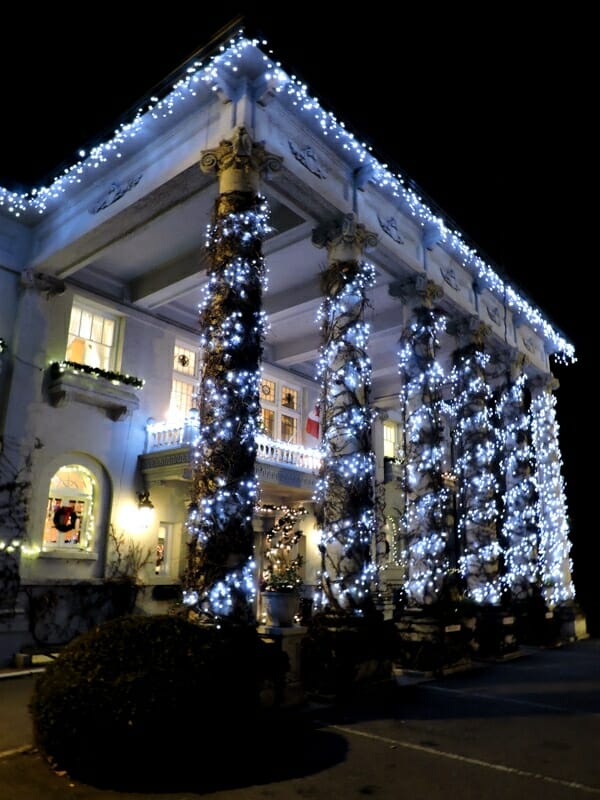 Walk under the 1.2km light loop around the lake and explore the themed zones with friends and family.

The Lights at Lafarge is free and easily accessed using public transport!

Pin to your Vancouver board for future planning 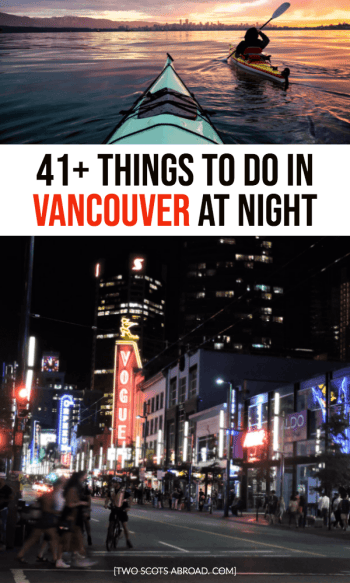