Me – Where are you staying?
Traveller – Poblado, you?
Me – Actually, La 70. If you are here for a while and want to live like the locals it seems to be an area where Paisas (people from Medellin) live and party
Traveller – (Laughs) Why would I want to live near locals?

This is a typical conversation had with ‘party’ traveller. They stick to the party hostel circle and then tell you the city is crap. He should want to spend time with Paisas, it is claimed that the women are the most beautiful women in the whole of Colombia, even South America! They also would take offence to this rejection as, according to our walking tour guide (more below), they think very highly of themselves. This is down to their historical advancements in the coffee trade and industrial revolution – they’ve always seen themselves a slightly superior!

Granted, we’ve only had three days but here is our Medellin itinerary, Colombia’s ‘real’ city.

What a dude Pablo is. And by Pablo I mean, the guy that runs Real City Walking Tours. Not the criminal with the same name, he was a horrible man. I had a conversation with a Kiwi and some Aussies in the back of a truck on the way back from The Adventure Brew Micro Brewey Tour in La Paz. The ‘know it all’ Kiwi was discussing how cool Pablo Escobar was… He had tunnels from his house all over the city of Medellin. What a legend! What an idiot that Kiwi was, he needs to take a visit to Medellin and meet Pablo and Carolina who run this four hour walking tour to get some perspective, Netflix has a lot to answer for. 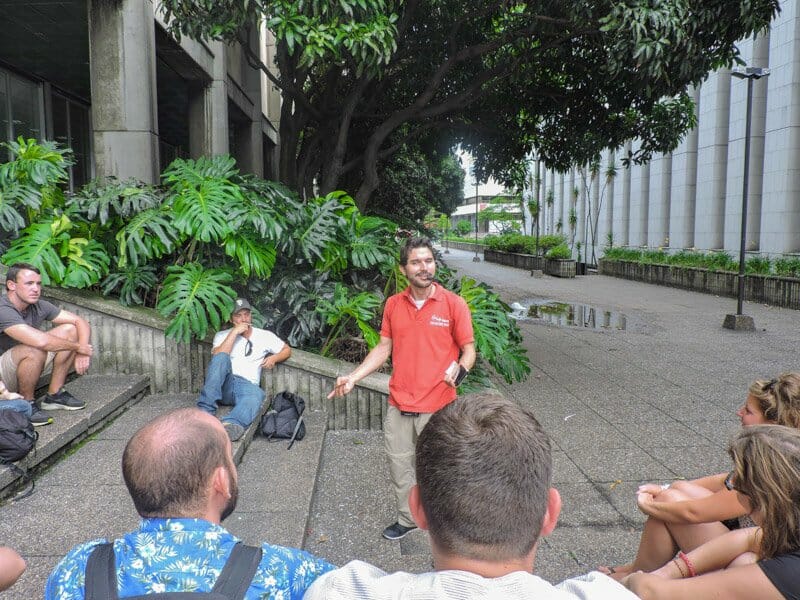 Politics past and present with Pablo

Wait until he hears that Carolina’s family had to flee Medellin when her uncle was kidnapped and later murdered. Or about Pablos’s uncle, he was outside Pablo’s Gran’s house while his gran was knitting on the balcony as Gran’s do. She looks down from the balcony and sees men pull guns out on his uncle, her son. Luckily his fate was better than Carlona’s uncle’s and his life was spared. Pablo told us that it is normal for most families to have a story like this, everyone has been touched by what was initially a civil war between the right and left which resulted in a war between the right, left, drug barons, the army and rebels. Everyone in Colombia felt the impact but Medellin being the epicentre, the people here suffered more.

Why The Real City Walking Tour is Awesome

The guides take the group around Colombia’s second biggest city (and man it’s big, population of 2.5 million) by foot and stop at important areas to give you information filled with passion and emotion. It’s a surprise to hear that Pablo has an engineering background and not Broadway!

Stops include Plaza Cisneros (Plaza of Lights) which, Carolina proudly tells us, is an example of Medellin’s programme of regeneration called Democracy Through Architecture aka “Urbanismo Social”. 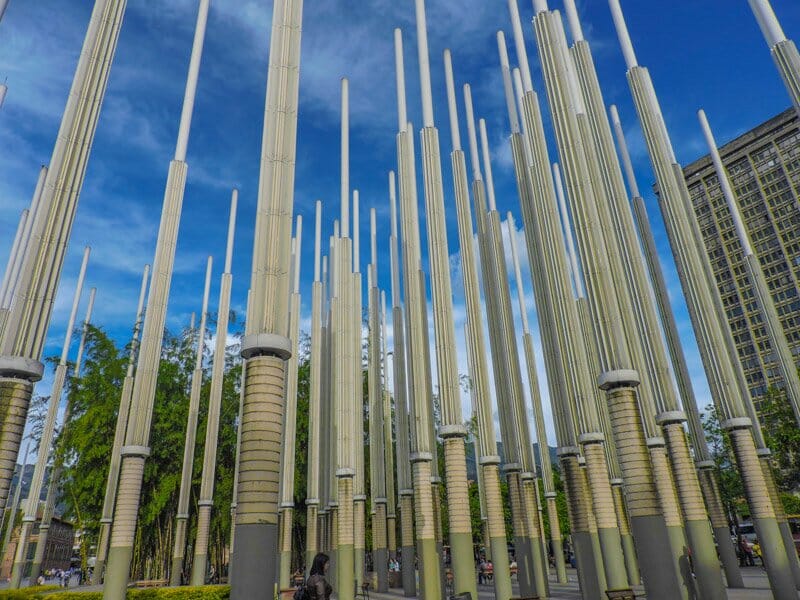 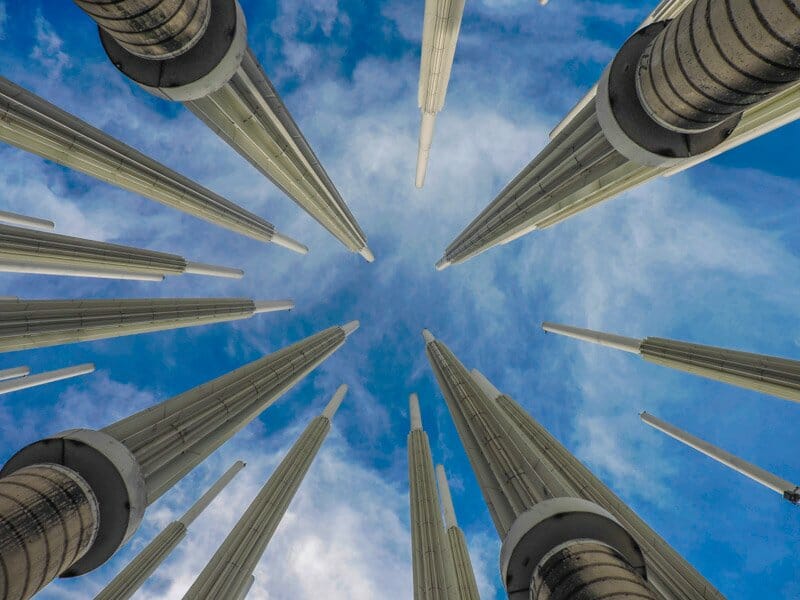 And Parque Bolivar – one of Pablo’s favourite places because you see the ‘real Medellin’ where old men sleep on benches, kids play on bikes, young people smoke illegal substances, couples enjoy an ice cream and drunk people sip on mentholated spirits (!) Colombians like to ‘salsa’ between both sides of good and bad! Does Parque Bolivar look familiar? You may spot it in the Netflix, Narcos scene when Escobar is talking to his cousin.

Love a good stare! They come up to the circle during information time and often interrupt the team to ask what they are saying. Hilarious! They are also ecstatic that you have chosen to go to Colombia. 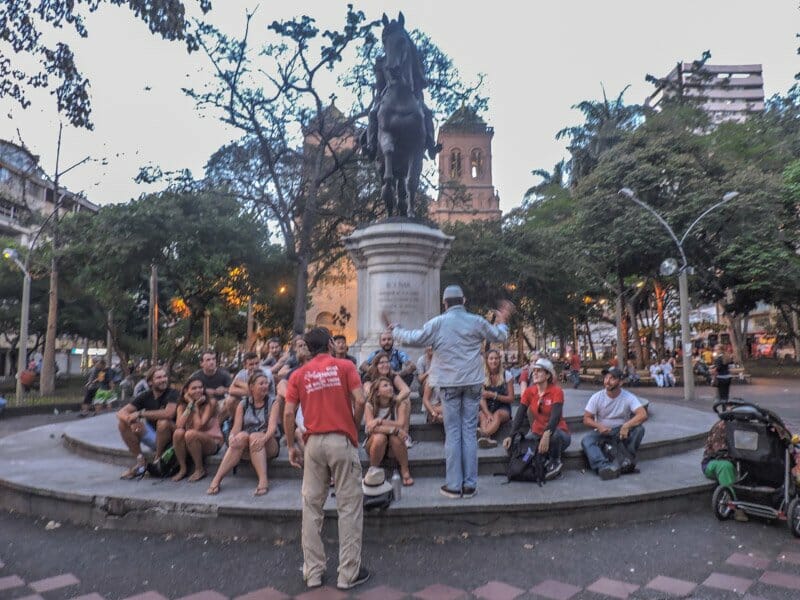 This guy in the photo joined the tour for five minutes, stood up and shouted ‘thank you for coming to Colombia.’ And he was not the first. Sober and drunk people alike acted this way. In Scotland, if someone shouts anything, don’t make eye contact! You’ll never get away from them.

‘Our country is flooded by myth’ says Pablo and he wants your questions to break down the stereotypes and challenge his knowledge. A traveller says she read that Escobar built lots of hospitals, not a fable Pablo has heard before. He debunks this and admits that yes, he built about 200 houses which is nothing when you look at how many people live in Medellin. Did he provide lots of jobs? The jobs provided were ones of violence – young boys trained to be soldiers, security, extortion. Didn’t the drug money benefit Medellin? Only 3% of the gross income of the city is from drug money, so no, states Pablo. And it doesn’t account from the amount of damage the cocaine trade did to Medellin through bombings, guns shots and the threat to democracy. Politicians and judges had to flee for their lives if they spoke up. Many would have taken backhanders out of fear and/or greed. Some are still in power today hence the lack of presence about real Medellin’s ‘painful past’ in the education system.

Pablo finishes the tour at San Antonio Park, I don’t want to steal his thunder as

…but here he shows you the horror of his childhood/teens and compares it to the hopeful future of Medellin through the artist Fernando Botero. Unfortunately 25 people had to die twenty years ago to give his analogy strength. 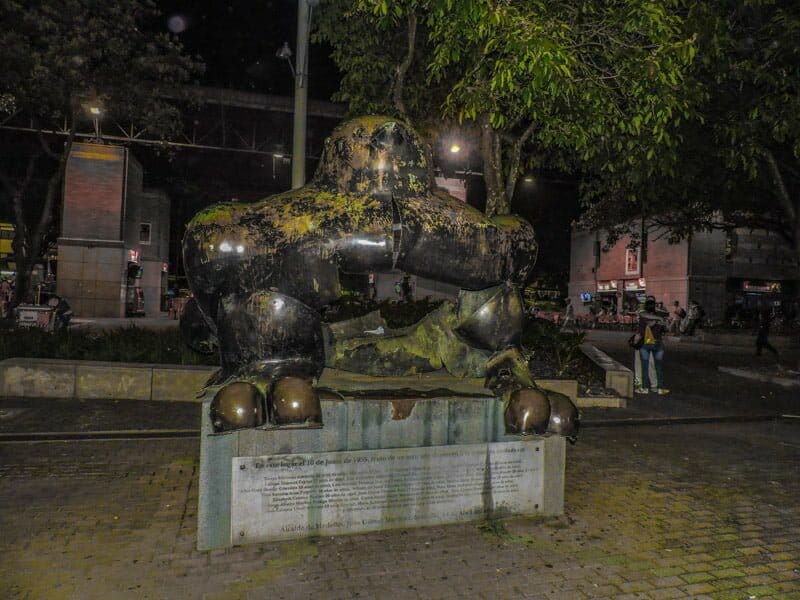 Troubles still occur however, the FARC (rebels) look to be moving as an unarmed political force as opposed to an army.

Those living in extreme poverty has halved (16% to 8%) and Colombians remain the happiest of people that we’ve met in our three months of travels!

There is no shortage of accommodation in Medellin. We visited Poblado, where most people stay but I’d say it’s just an area with bars which have prices comparable to any city in the UK. If you are looking for the real Medellin then your hostel of choice is The Wandering Paisa. Proudly, its slogan is ‘the other side of Medellin’ and it is situated close to LA 70 which has lots of local bars (local prices!) and restaurants on it.

Here’s us enjoying cheap sangria on a Sunday. Check out this list of drinks in Colombia for more authentic local options! 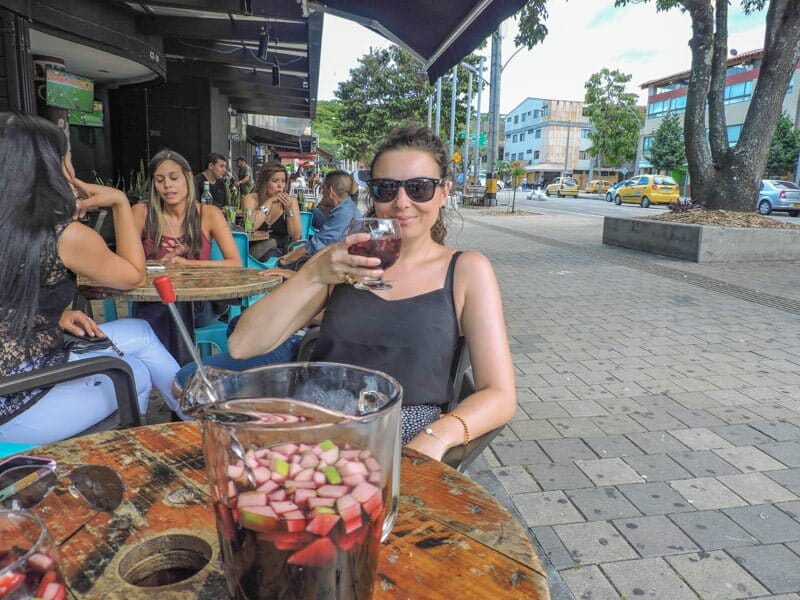 Remember everything is connected by the metro (Estudio is your nearest stop). Medellin were playing a semi final (football) the day we arrived so we couldn’t resist drinking sangria in the sun with the Paisas at a ‘bar local’ which was showing the game. They came from behind to win, the atmosphere was electric!

The Wandering Paisa is owned by two North American lads from Seattle but we never met them. Gisela, a Paisan, was our main point of contact and she couldn’t have been more helpful. She gave us an extensive map (Craig’s favourite ever) created by Paisa Road, it was extremely helpful and neatly packaged so you don’t obviously look like a tourist. We decided to cook most nights since we were next to an Exito supermarket (why is the service so slow?!) and Wandering Paisa has a decent sized kitchen and facilities. And for once we stuck to it, well done us!

We also took a salsa class (free) with other guests. I say ‘we’, Craig had to bow out after ‘basic’ step one, he claims Scottish men don’t have enough rhythm…especially after seven beers! I also got lots of blogging work done due to the good WiFi (gearing up for no WiFi in Cuba for three weeks!) 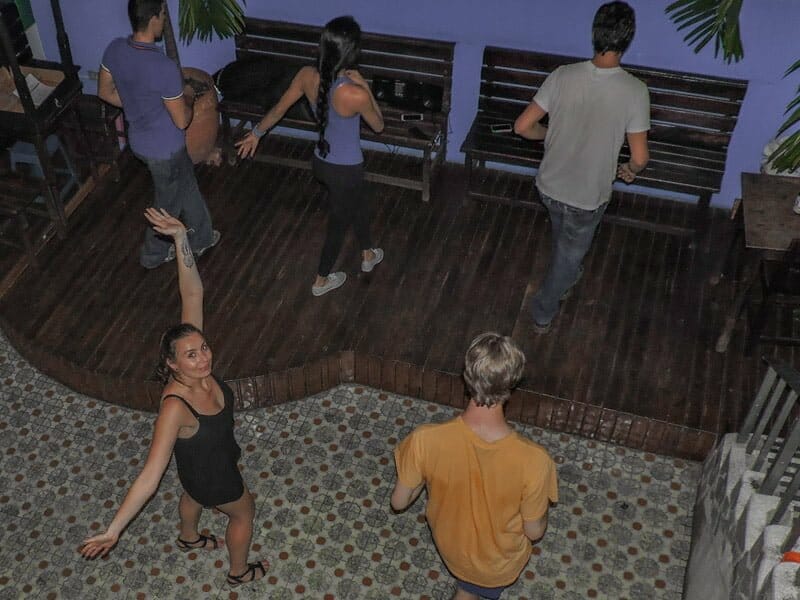 And most importantly for Craig – the shower was hot! We’ve had two weeks of cold showers which is great in the Caribbean heat but Craig says it’s no use for washing soap off hairy men like himself.

Thanks to The Wandering Paisa for our stay, as always an honest review.

Do like locals do in ‘real Medellin’ and hop on the cable cars (from Santo Domingo Sabio metro station)! For 2000 COP / 50p you can go anywhere in the city using the metro and cable cars (like the ones in La Paz, Bolivia). This was part of the Education with Dignity policies which aimed to improve the future of Medellin, opening up access from the outskirts to the city. Do like gringos do and pay the 10, 000 COP / £2.52 to take the additional line over the park. It takes 25 minutes in each way and is bonito (beautiful). 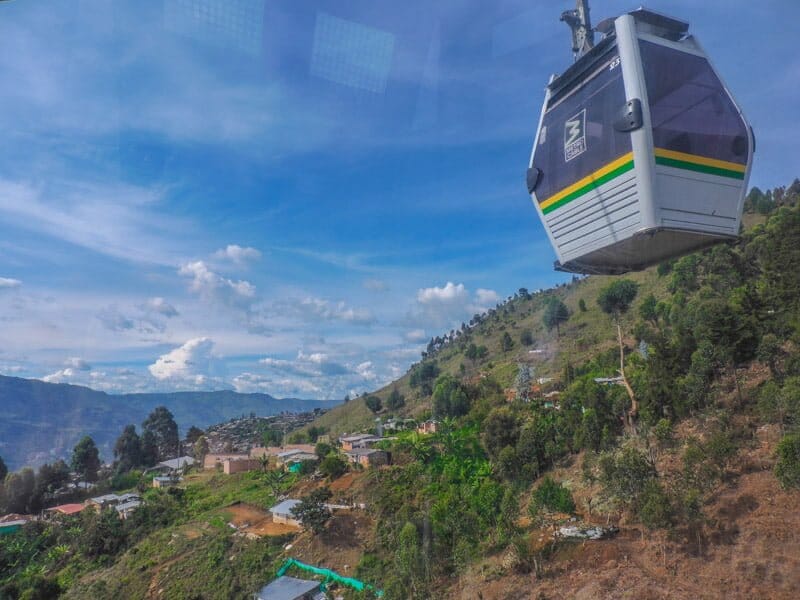 We really loved Medellin and are keen to return (maybe live?) With a population of 2.5 million we can only pretend to present the real Medellin in three days but we hope you can add to our recommendations in the comments below…

Going to Medellin?
Hover over image and pin for later! 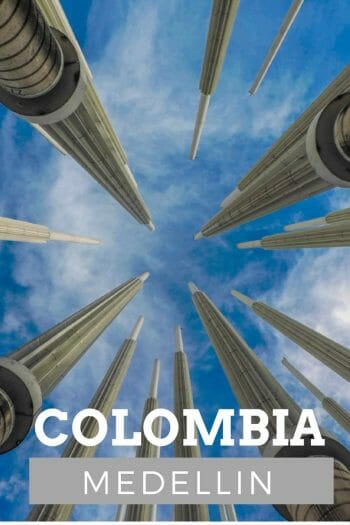 18 thoughts on “The Real Medellin Itinerary”