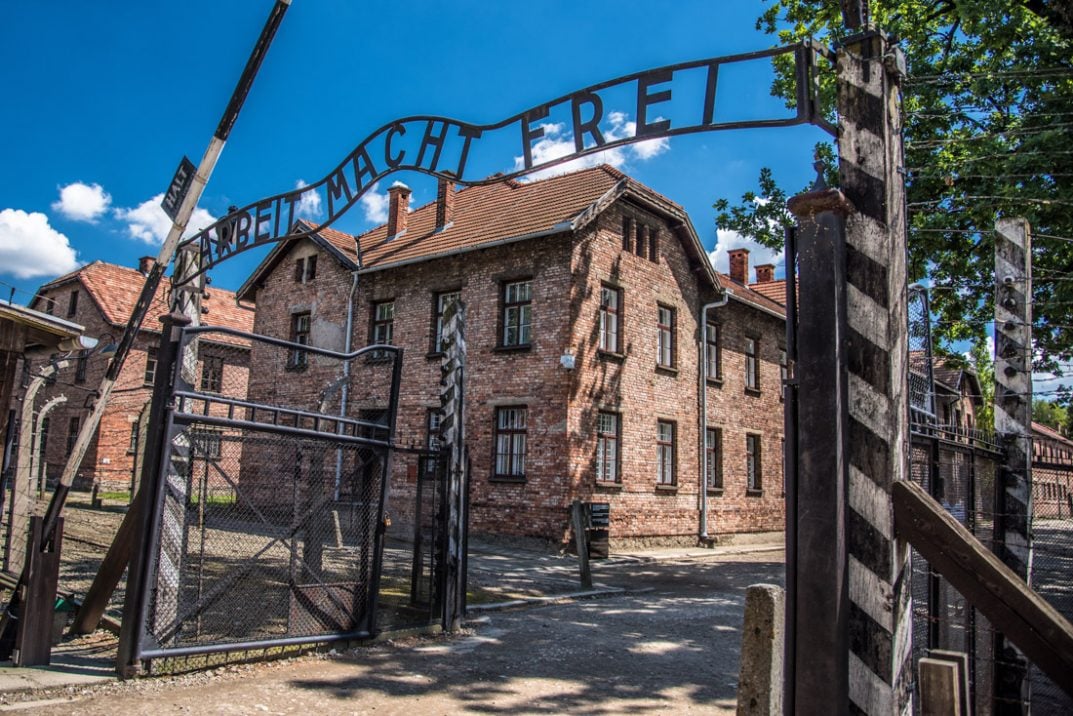 Auschwitz, the name alone evokes feelings of terror and sadness. An open grave to the millions of persecuted Jews and others who opposed the Third Reich. A must on every European itinerary, this guide details how to get to Auschwitz from Krakow, the nearest city to the death camps in Poland. Spending time in Krakow? Click here to read our one to three-day itinerary.

To visit the camps of Auschwitz and Birkenau is to walk amongst the ghosts of those who were brave, those who passed too young and those who died for simply being ‘different’.

This is hallowed ground which we have the privilege of walking on while paying our respects to these inspirational men, women and children. The Holocaust of Auschwitz must never be forgotten.

What are Auschwitz and Birkenau?

Essentially Auschwitz and Birkenau are the death camps built by Nazi Germany in 1940.

This is where Polish Political prisoners and other Polish people were displaced by the German army at the time.

It was then decided to use them as Hitler’s ‘final solution’ for the Jews, Gypsies and all those who were classed as a threat to the Nazis.

As Auschwitz wasn’t big enough for this expansion, it was decided that a second camp, Auschwitz II or Birkenau would be built for the sole purpose of becoming a death camp.

The railway which leads into the Death Camp of Birkenau brought people from all over Europe to be sorted like cattle for the slaughter.

Those who were not murdered when they arrived, were forced to become laborers for the German war effort, living in horrific conditions.

How Many People died in Auschwitz?

It is thought to be about 1.1 million of the 1.3 million who were sent to the camps in Auschwitz.

Liberated in January 1945 by the Soviet Army, there were only about 6000 prisoners that they managed to free.

The name of the camp Auschwitz itself was the Germanization of the Polish name Oświęcim.

This is the town where the camp was built.

Many people also wonder how to pronounce Auschwitz, so here it is phonetically for you – Ow-svitch.

It is situated just outside the town of Oświęcim, southern Poland. The town itself is very accessible from all parts of Poland and Europe. 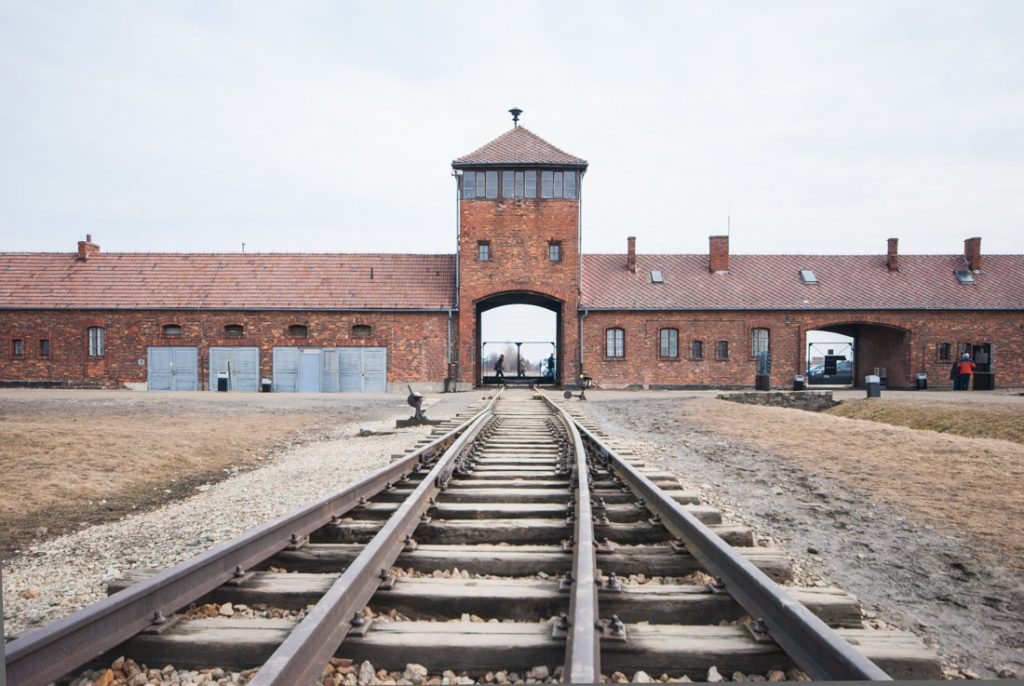 How do I get to Auschwitz?

There are a number of ways and hopefully, this will help you choose the one that’s best for you during your trip to Poland.

When considering the following methods remember that Auschwitz and Birkenau are situated some three kilometers apart which is a forty minutes’ walk.

There is a free bus which links the two sites from mid-April to the end of October. They depart every sixty minutes.

How to Get to Auschwitz from Krakow

The distance from Krakow to Auschwitz is about 66 km and there are four main ways to get there. You can book a tour, hire a private taxi, use the public bus or visit by public train.

Over one million people visit Auschwitz so please consider that lines are long. Gemma’s sister-in-law visited recently and did not book a tour until she arrived in Krakow. When she arrived at Auschwitz (by private taxi) at 06:30 there was already a line of about 500 people in front. It took two hours to gain entry. So please consider this as you read each option in detail.

I highly recommend that you factor a trip to Auschwitz into your Krakow itinerary and book before you arrive. This way you won’t waste time waiting in line, you do need the full day to cover the area fully.

Whatever route you take, remember you have to book your entry to Auschwitz in advance.

One of the benefits of a guided tour to Auschwitz is that it handles all of your transportation needs, leaving you to sit and reflect on what you are about to see and what you have seen.

If you are looking to purchase the tour in advance, then the following links from Get Your Guide, Auschwitz may suit you.

They feature fast-track entry which is advisable as there can often be queues of up to two hours to enter. Let’s look at the best Auschwitz tours and what they offer.

This full-day tour to Auschwitz-Birkenau offers a Krakow pick up in a comfortable air-conditioned bus with an English speaking driver.

The journey to Auschwitz takes around 1.5 hours.

When you arrive at Auschwitz, you will meet with a local guide. Five languages are available.

During this seven-hour tour, you will observe both Auschwitz and Birkenau camps while you learn about history.

The tour also includes a guide-led exploration of the prison blocks, gas chambers and crematoria building.

Guests are asked to bring their own lunch as this is a jam-packed day with only a short lunch break.

This is a popular tour. If it is sold out, you can check availability at this other full day tour.

Like the above-guided tours, this self-guided tour starts and ends in Krakow.

Your driver organizes your entry tickets and tell you a collection time and pick up point.

It is advised to set aside two hours for Auschwitz I visiting the permanent exhibition at the prisoners’ barracks.

This includes original artefacts like glasses, hair and luggage. A haunting vision that will stay with you. Gemma visited Auschwitz when she was nineteen years old and this is one of the memories that has stuck with her.

After Auschwitz I, visit Birkenau barracks and crematorium for around one hour before you meet your driver.

From Krakow: Auschwitz and Salt Mine with Pick-up Options $$

If you only have one day to take a day trip from Krakow, consider this Auschwitz and Salt Mines tour.

Like above, your driver will drive you from Krakow to Auschwitz. You then spend around 3.5 hours at Auschwitz-Birkenau then a further 2.5 hours at the UNESCO World Heritage, Wieliczka Salt Mine.

Both tours are hosted by English-speaking guides. 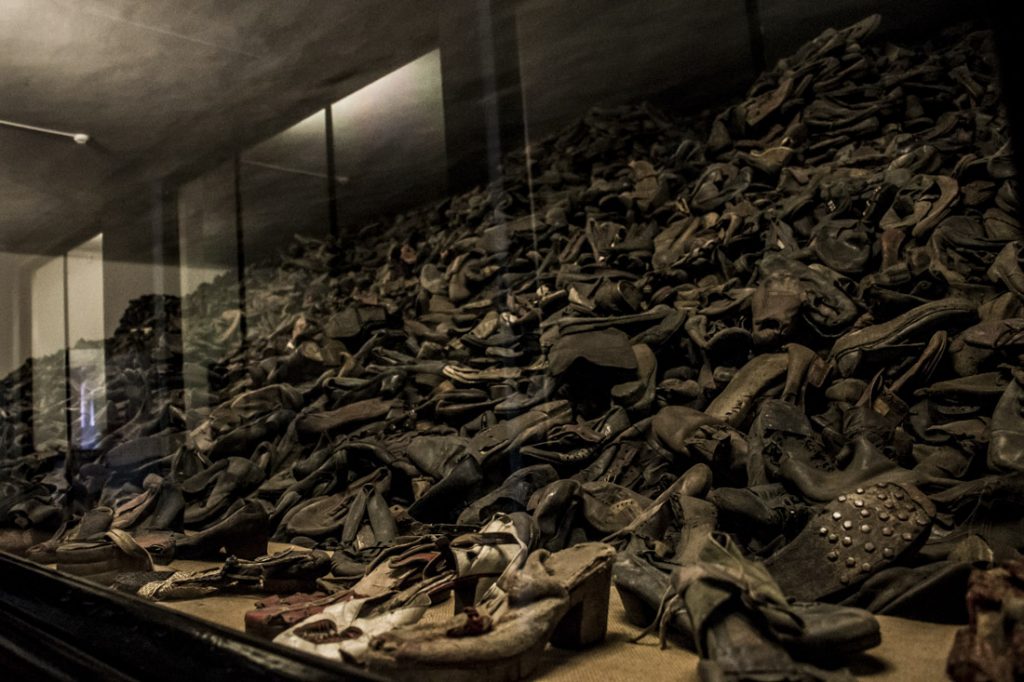 If you want to go independently, you can hire a taxi.

While the entrance fee to Auschwitz is free, the guided tour is not. As I’ve stressed above, you must book in advance.

The guides are experts. They know the history, the stories behind people who died there and often are descendants of survivors. Tours are worth the 52 PLN ($13 or £11).

Bringing the history alive with their stories, you need to remember tissues. Tears are openly shed by visitors, your heart will break with each new horror unfolded to you.

Getting to Auschwitz by Public Transport

Another way to get to Auschwitz is by public bus.

Getting the bus from Krakow to Auschwitz costs about 13 PLN ($4 or £3), each way. This is relatively cheap if you are on a budget. The bus stop is at the entrance to Auschwitz and the journey takes around two hours.

4. Train from Krakow to Auschwitz $

The bus station and train stations are next to each other in Krakow.

The train is double the price of the bus but a slightly shorter journey time of 1 hour 40 mins.

Check bus and train times at the Tourist Information Center in Krakow.

Coming from Warsaw to Auschwitz? The best way is by train.

There is a super fast train that will get you to Krakow in about 2.5 hrs.

There are two main airports near Auschwitz, John Paul II in Krakow and Katowice. The closest airport to Auschwitz is the John Paul II, Krakow.

Getting from the airport in Krakow to Auschwitz is fairly easy as there are five different options.

Auschwitz is situated in the town of Oświęcim.

The town offers several hotels and guest houses for you to choose from. You can see the full range here.

Hotel Olecki is the most popular choice. This affordable hotel has modern rooms with WiFi. Breakfast is an option. The hotel also has apartments on-site. Hotel Olecki is only 200 yards from Auschwitz. Check the rates at TripAdvisor or Booking.

You will not be short on choice for hotels in this city.

My advice is to choose one near the city center as you can access all the train and bus links easier.

Most hotels offer a bed and breakfast service.

During my trips, I stayed at Home Hotel, Krakow. This hotel was only a seven-minute walk from the Old Market Square and offered a very comfortable stay.

You are going to be there for at least four to six hours.

There is no respite from the sun or rain. There is nowhere to sit if you are tired. You should consider the weather conditions carefully. I have visited in both July and April. The sun was relentless on both occasions.

One important point to be aware of is that you cannot take bags bigger than A5 size, into Auschwitz I.

You will have to store it in the lockers that are provided for you.

You are permitted to take photographs in both Auschwitz and Birkenau.

However, there are some areas in which photography is strictly prohibited.

Please be mindful of these areas and keep in mind that you are walking in places where people died and were buried.

‘Selfies’ really are not in good taste.

At times, you will see people praying together. You may also see memorials taking place at various parts of the camps. You should be considerate of these events taking place. If you wish to photograph them, it is advisable to ask their permission first.

Note: If you are considering a day trip from the UK to Auschwitz, it really isn’t possible to do this.

You will spend at least four to six hours alone in the camps. Add on your travel time, and it makes this impossible. You are more advisable to make a weekend trip. 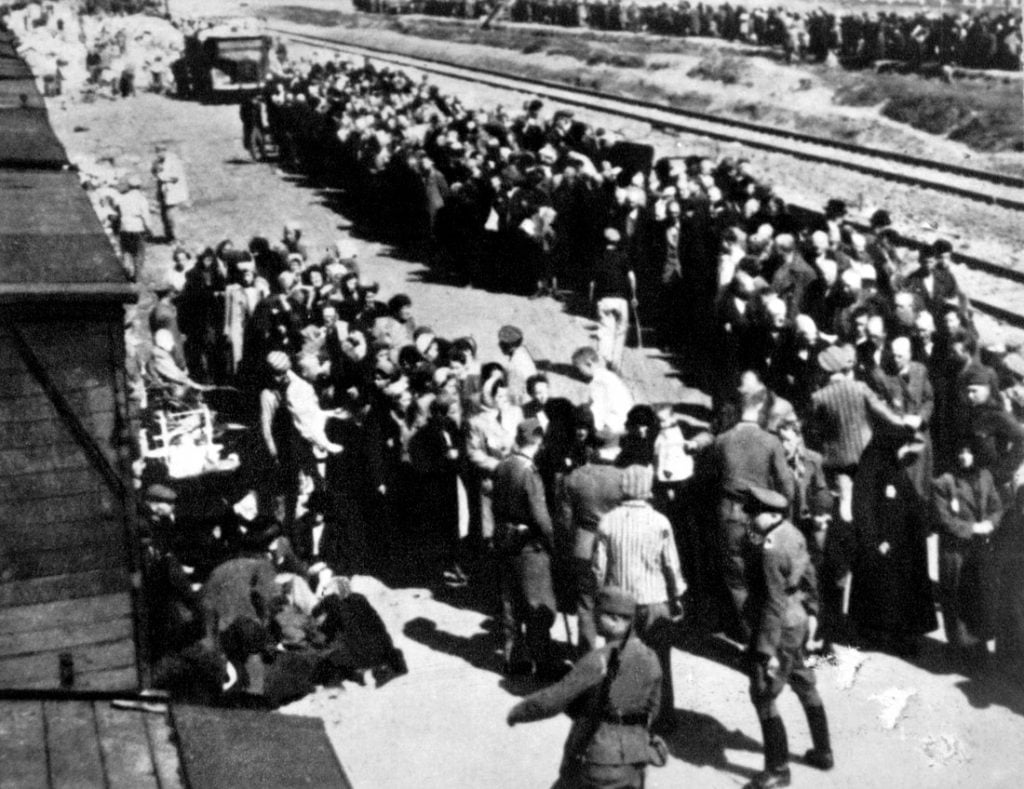 This is a UNESCO World Heritage site.

More than 1.5 million people make their pilgrimage to the Holocaust Museum, Auschwitz every year.

It is worth noting the times of opening before you start planning and book Auschwitz.

The camps are open seven days a week from 07:30. Closing times depend on the month of the year:

Individual visitors are free to see the Birkenau site anytime during opening hours.

You can access the free bus which links the two sites from April 15th through October 31st departing every sixty minutes.

Note: The bus runs from Birkenau on the hour and from Auschwitz, thirty minutes later.

You may also be interested in the following tours as you plan your Krakow itinerary.

Planning your trip to Krakow?
Save to your Pinterest board 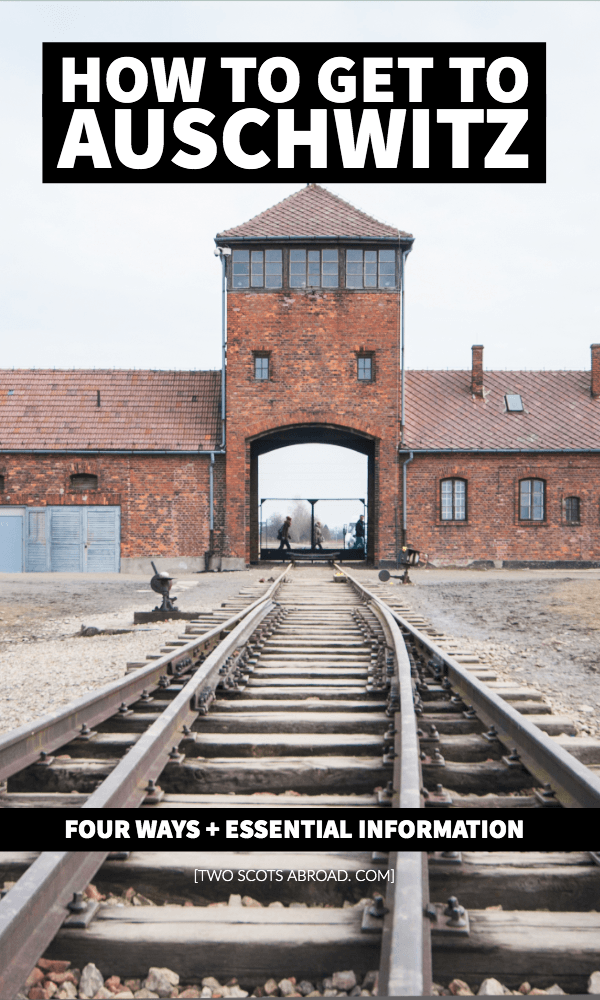 Beginning your journey by walking through the gate to Auschwitz will set the scene of just how frightened the people must have been when they found themselves in Oświęcim.

As you walk around the camps you are treading in the footsteps of the 1.3 million souls who lived and died here.

You will be able to enter one of the gas chambers of Auschwitz and feel these ghosts as you ponder how humanity can be so cruel.

During the final walk back to where you entered, you realize just why we cannot forget what went on in these camps and others like them.

Author – Ruth is a school teacher and a travel fanatic with a bucket list that’s getting smaller.

Gemma and Craig are full-time workers with a life-long travel habit. Flirting with 40 and let loose on the world! Gemma writes, Craig looks good in the photos.