In the heart of Transylvania, on top of a cliff, is the majestic silhouette of one of the most famous structures in the fictional world – the Dracula Castle. This guide details how to get from Bucharest to Transylvania to visit Romania’s famous Bran Castle.

Built over 600 years ago, the castle retains and projects to its visitors some of the pride of the knights that passed its doors in ancient times. At present, it is one of the main travel destinations in Romania. Inside the castle is the permanent Bran Museum, which displays an impressive collection of ceramics, furniture and weaponry.

Besides the fact that this is one of the most well-preserved and impressive medieval castles in Romania (and former royal residence), legend has it that this castle is the resting place of the famous Count Dracula. This is precisely the reason why hundreds of thousands of visitors visit it each year, in search of his spirit.

» Going to Bucharest? Don’t miss our popular guide on things to do

The myth of Dracula from Bram Stoker’s novel has transformed Bran Castle into a world destination. Forbes places the famous castle alongside the most expensive real estate properties like the villa in Beverly Hills where The Godfather was filmed and where John F Kennedy spent his honeymoon.

Full of historical treasures and cultural heritage, the castle is a great example of medieval defensive strongholds, built as a fortress by the Teutonic Order in 1212.

Furthermore, it was used as a residence for the Habsburg, Holzhausen and Sandhofer royal families.

In the 1920s, citizens of Brașov offered the building as a gift to Queen Mary of Romania. A token of appreciation for her contribution to the unification process of the country. This is when it became a castle.

But, although it bears an impressive historical heritage that spans over 600 years, its main appeal is the legend of Dracula!

Where is Dracula’s Castle?

You can find Bran Castle at the entrance of the Rucăr-Bran passage, on the road between the cities of Brașov and Câmpulung, placed between the Bucegi and Piatra Craiului mountain tops.

The distance from Brașov to the castle is of 30 km, on the national road DN73, starting from the city at the west, through the Bartolomeu neighborhood.

How to get to Bran Castle, Romania?

The distance from Bucharest to the famous Bran Castle is around 200 km and there are five ways to get there.

You can book a car, a tour, hire a private taxi, use the public bus or go there by public train.

Bran Castle is one of the most traveled destinations in Romania, expect long lines if not booking a tour with ‘skip the line’ options.

I recommend planning well ahead how to get there and to book enough time to discover the history and the legend surrounding the place.

It takes around three hours to drive to Bran Castle from Bucharest.

You will find the castle on your left.

The main reason to go there by car is that you’re not restricted by time and you can enjoy the sightseeing around the castle.

Choosing an agency to handle your transport from Bucharest to Bran Castle, as well as the entrance ticket is a great option.

This means you can fully enjoy the travel experience, leaving the stress of organizing the tour as someone.

Here are some options if you would like to choose to book a tour.

This Dracula Castle full-day tour leave Bucharest early morning and takes you on a jam-packed tour lasting for 12 hours.

Your guide shares stories about Dracula and educates you about how the Bran Castle has transformed itself in its 600 years of existence.

You also get also a guided tour Brașov Old Town and Peleș Castle, in Sinaia – another royal residence. 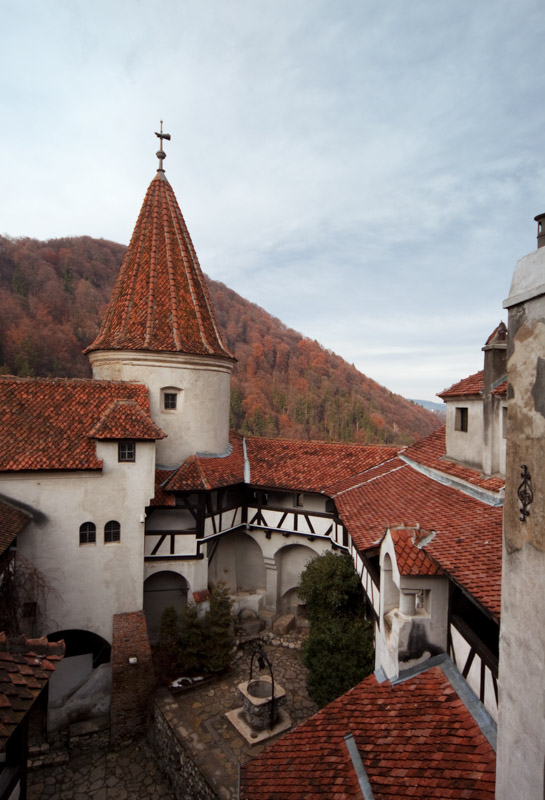 If you choose to visit the castle in a small group of up to eight people, then this tour option that suits you best. For less than 300 lei/person (64 Euro) you will receive:

On this full-day tour from Bucharest (12 hours), you will visit the historic region, exploring the influence of different cultures, including Romanian, Saxon, Turkish and Hungarian.

You will visit both the former royal residence of Peleș Castle and Bran Castle, also known as Dracula’s castle, for less than 400 lei/person (85 Euros). Click here for availability and best rates.

Train from Bucharest to Bran Castle

From there you only have to take a short bus or taxi transfer to Bran Castle.

Auto-station No. 2 Brașov offers regular public bus between Brașov and Bran-Moeciu, departing every 30 minutes during the week, and every hour during the weekend.

If you do not have a car at your disposal, and you do not want to go by train, consider a taxi from Bucharest to Bran.

A drive from Bucharest to Vlad Castle takes about 3 hours. Outside of Otopeni-Bucharest Airport, there is a taxi rank.

This option will be at least eight times higher than train/bus prices.

» You may also like: Bucharest’s best day trips – history, nature and the beach

If you decide to stay one night or more, here are two of my preferred accommodation options near Bran Castle.

These are also two of the best-rated hotels in the area.

Situated in Bran and with Bran Castle reachable within 500 metres, Conacul Törzburg features a garden, non-smoking rooms, free WiFi and a bar.

Boasting luggage storage space, this property also provides guests with a restaurant, where a buffet breakfast is available each morning.

Rooms come with a wardrobe, a flat-screen TV and a private bathroom.

This property also has one of the best-rated locations in Bran, and really, for this place you are getting more for your money compared to other properties in the area.

Prices start from $100 for a double room, but the proximity (only 3 minutes, 195 m on foot) and the view really make it worth the price.

→ Check the best rates at TripAdvisor and Booking.

A very good alternative at half the price is Hanul Bran

Just 300 m from the famous Bran Castle, this hotel has a large restaurant and hotel units with free Wi-Fi and cable TV.

Overlooking the mountains or Bran castle, its rooms and suites feature carpeted floors, desk and minibar. The private bathroom comes with shower, hairdryer and free toiletries.

The restaurant has an “a la carte” menu and consists of two halls and a summer terrace.

One hall features a mediaeval theme and wooden furnishings, offers a bar and has views of the castle. The adjacent Panoramic Restaurant serves traditional specialities from the region.

The local bus station, a 24/7 grocery shop and a bazaar with souvenirs are all 400 m from Hanul Bran.

If visiting in winter, the nearest ski slopes are just 2.5 km away, while the Poiana Brasov Ski Resort with 12 slopes are approximately 22 km from Hanul Bran.

The prices start from $40 for a double extra large room, but can also be less expensive if you book a room in advance.

→  Check the best rates at TripAdvisor and Booking.

Looking for hotels in Bucharest? Here’s our guide

Dracula’s Castle is proof that a vacation in Romania should be top of everyone’s European bucket list. Its beauty even rivals the famous Neuschwanstein in Germany.

Between The Legend and History

Although it has entered the tour circuit and is known as Dracula’s Castle, it seems that Vlad Tepes – the historic character that was the inspiration for Bram Stoker – has never lived here.

In fact, the Bran Castle was built on a wooden fortification by the Teutonic Knights in 1225.

Subsequently, in 1337, the Saxons arrived on the Chair of Brașov and asked King Ludwig of Hungary to build a new fortress, the present Bran Castle.

It was used by Sigismund of Luxembourg, emperor and king of Hungary as a strategic base in 1395, remaining a defensive fortress for centuries.

In 1920, the Brasov City Council donated Bran Castle to the Queen Mary as a gratitude for the achievement of the Great Union in 1918.

The year 2000 was the year when Archduke Dominic of Habsburg claimed it, then in 2009, it was re-furnished.

Although the Vlad the Impaler Castle, in the heart of Transylvania, has six centuries of history behind it, Dracula’s myth has transformed it into the tourist destination.

Where does the castle and Dracula legend come from?

The well-known English writer, Bram Stoker, describes a Transylvanian castle that was set on a tall rock in which a blood creature lived.

Bran Castle is the only one in Transylvania that suits the description, and for this reason, it has been tied to the story.

However, the Irish writer has carefully avoided creating a real historical connection between his character, Count Dracula, and the historical personality of Vlad Tepes, the fearsome Wallachian ruler.

When is the Best Time to Visit Transylvania?

Thanks to the reader who let us know that there are three major Halloween parties in Transylvania!

Firstly, one in Bran Castle which is a club party.

Secondly, the party in Sighisoara citadel, Vlad birthplace, with magicians shows and Ritual Killing of a Living Dead.

Finally, an event in Dracula Castle with a banquet. Have you been? tell us below.

Save for later planning 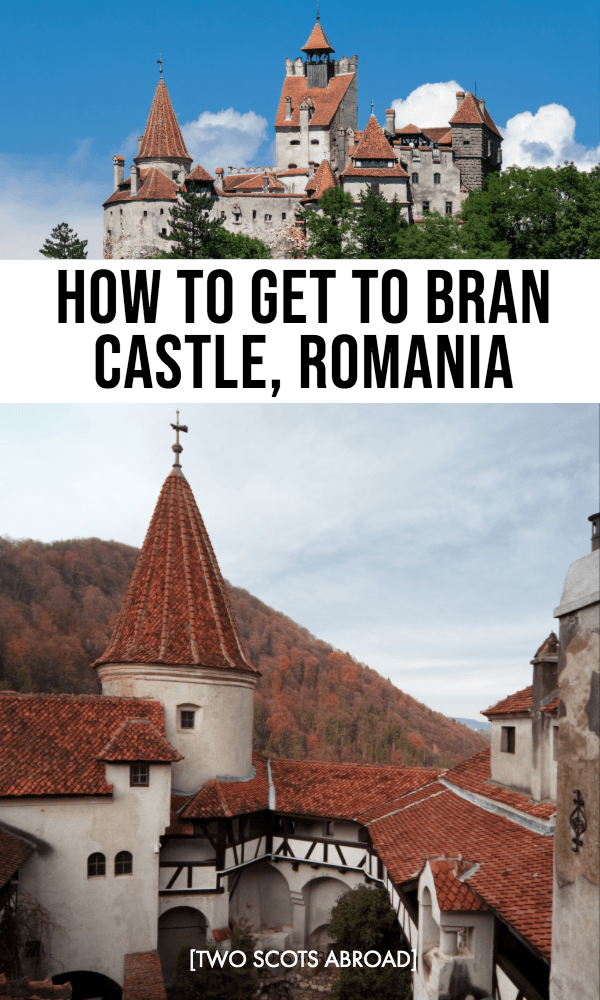 History, myths, intrigues … For legends, die-hards and history enthusiasts, for romantic lovers eager to discover the hidden stories of the thick walls of the castles, or perhaps simply tourists who want to know the world long and wide, Bran Castle, also called Dracula’s Castle, is undoubtedly a tourist destination not to be missed.

About the author
Vivianne is an online content creator from US who fell in love with Romania since she first visited her friends there. She is in love with the mountains, the beach, the people and the Romanian culture. She felt such a powerful attraction with the place that she even married a Romanian local.

» Read next: Our Romania travel guide+ Bucharest at Christmas

2 thoughts on “Bucharest to Transylvania: How to get to Bran Castle”