Pripyat was once a young, thriving city in the north of Ukraine, but on April 26th 1986, its potential was cut short when reactor number four at the Chernobyl Nuclear Power Plant exploded causing the world’s worst ecological disaster.

» Visiting to Kiev? Don’t miss our guide on things to do there

Can You Go to Chernobyl?

Yes, you can go to the cities of Chernobyl and Pripyat.

Pripyat is the closest city to the Chernobyl Nuclear Power Plant which many people are not aware of as the whole area is often simply named Chernobyl.

However, you can’t visit independently.

You have to pay an organised and regulated Chernobyl tour.

Full-day tours leave from Kiev and last 10-12 hours. There is also the option of a 2-day tour where you stay in Chernobyl. 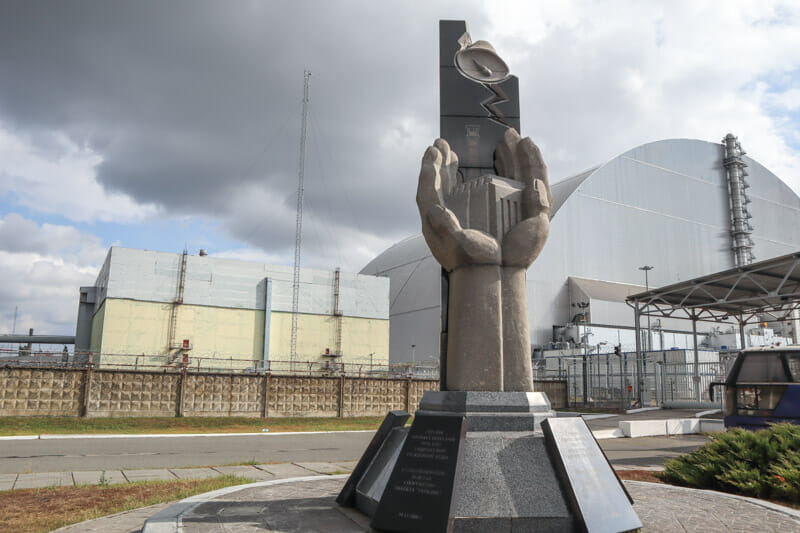 Is Chernobyl safe to visit now? I asked my friend Laura who works as a full-time radiographer.

Yes, she replies. Do you want to go?

Interest in visiting Chernobyl has increased since the airing of the HBO hit show but this isn’t the only reason that fellow visitors book tours from Kiev.

We met a couple who work in the nuclear industry, an Irish guy whose grandad temporarily looked after child evacuees from Chernobyl in the 80s and a photographer who is a fan of abandoned locations.

Whatever your reasons for visiting Chernobyl, you can be assured that if you choose the right tour operator your trip will be safe, regulated and insightful. You have to be over 18-year-old to visit by the way.

Note: Chernobyl was just one city affected by the explosion and fallout in the Polesia region. The new city of Pripyat and other smaller towns and villages also suffered.

» » You may also like: 40 haunting Chernobyl pictures taken today « « 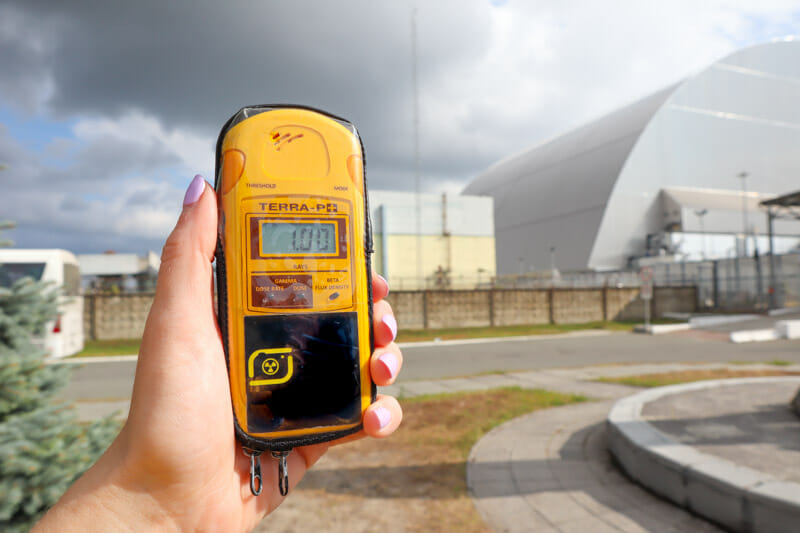 We opted for this one day Chernobyl tour from Kiev for three reasons:

The tour exceeded my expectations in some way but fell short in others. 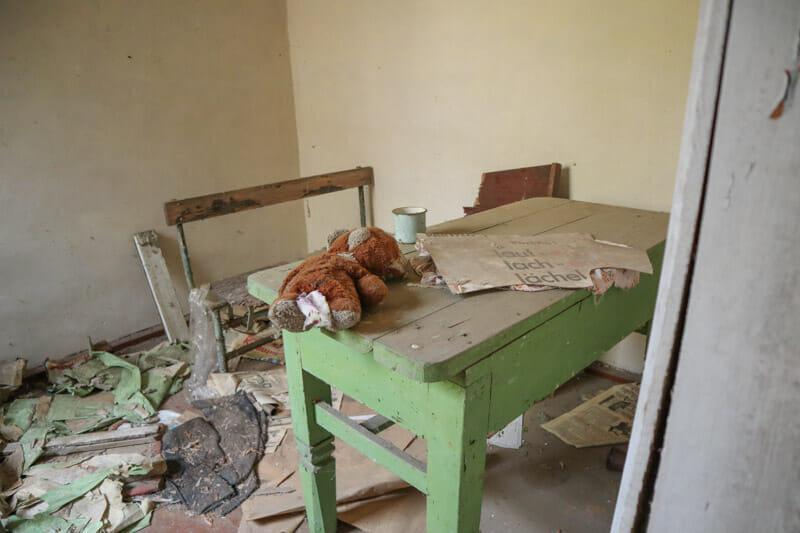 We left the meeting point, which is a hotel five minutes walk from Independent Square, in Kiev at 08:30. This was one hour after the stated meeting time.

During the hour, our guide collected passport information which is essential for gaining access to Chernobyl.

Two members of the group forgot their passports.

One left and the other collected their passport at their hotel and took a taxi to meet us at the first stop at a petrol/gas station.

The journey is comfortable. The bus seats are large, there is a pull-down TV which shows a documentary about the Chernobyl disaster and the free WiFi functions well.

Remember to wear a long-sleeved shirt, trousers/pants and closed shoes or you won’t be allowed to enter Chernobyl. 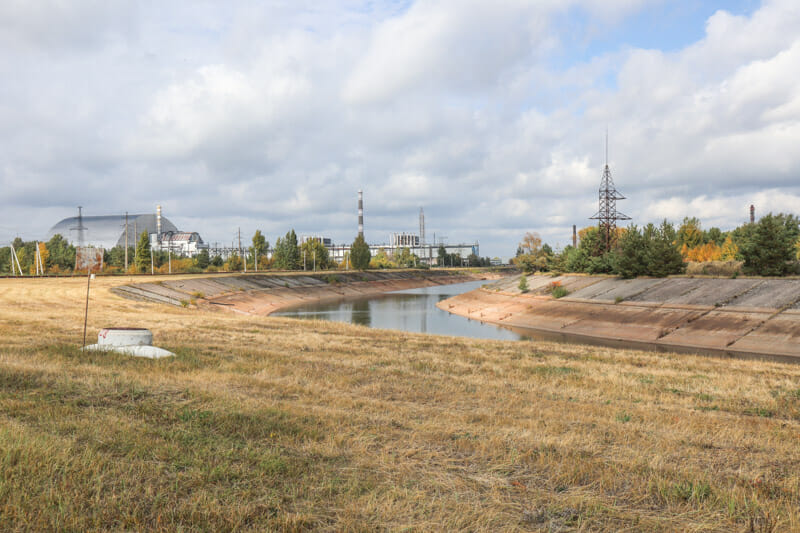 As soon as the booking goes through communication kicks off for this Chernobyl tour.

An email asks for your full name, date of birth, citizenship and passport details. Without these details, you can’t visit Chernobyl. The tour company uses them to apply for your permit which you receive on the morning of the tour.

A reminder that your tour is coming up is sent by GetYourGuide before the day of your trip.

The only advice missing is to pack some snacks which you can eat on the bus, not at Chernobyl.

As you arrive at the Chernobyl Dytiatky checkpoint, your guide collects your permission slips and asks you to keep them with your passport.

When it is your group’s turn, you show them to the police.

Once you are through the checkpoint you line up again to collect your radiation dosage reader then the tour can begin.

Throughout the day, our guide tells us exactly what is coming up next.

They are also great at stating how long you have at each stop and keeping everyone together.

We rarely ran into other tour groups even though there were around eight other buses visiting at the same time.

Lunch is served at the Chernobyl Power Plant alongside today’s workers.

I was surprised to hear that people live and work in Chernobyl, but the full cleanup is set to take anywhere from 20 to 100s of years.

Why the varying number of years?

Different areas of the Exclusion Zone return higher numbers of roentgen per second. If you rent a Geiger counter you will see this.

You’ll also see lots of dogs in Chernobyl. They are healthy looking as the workers feed them. Avoid patting them as they accompany you on your tour. 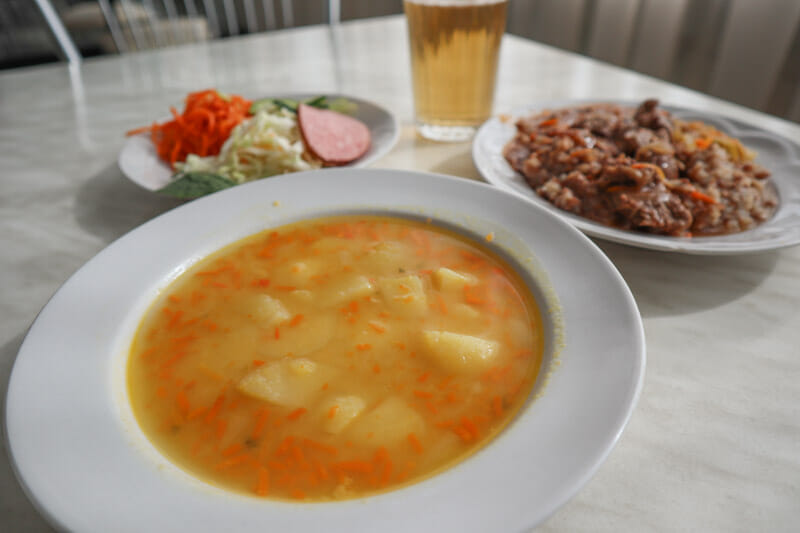 After the explosion, the 30,000km radius from the Chernobyl Nuclear Power Plant was called the Exclusion Zone. A further 10,000km zone was created around the plant itself.

On the 28th April 1986, the military forced locals to leave, giving them only a few hours to collect their belongings. They were told they could return soon.

Anything left was then ditched by officials, so view abandoned teddy bears as photography props.

Chernobyl Liquidators was the official term given to the civil and military heroes who cleaned up the consequences of this tragic event.

According to our guide, the current safe radiation level for living in Ukraine is 0.03 microsievert per hour.

The machine beeps when you are above Ukranian safety levels.

Our guide says it doesn’t mean you are infected as the length of time spent in radiation zones has a big impact on the likeliness of receiving radiation poisoning.

At the end of the tour, the reading stated that I received one microsievert of ionizing radiation. This is no more than normal background radiation levels, I’m advised.

Laura tells me that’s around 1/10 of a chest x-ray, size of a person depending.

Three times throughout the day we enter radiation level checks to ensure we are safe to dine at the Power Plant canteen and safe to leave Chernobyl altogether.

Don’t touch anything or put anything down on the ground. This includes camera tripods.

The standout reason for booking this tour is that the level of safety precautions is higher than other tours.

At the Red Forest, where fallout caused all the trees to turn orange and die, there are radiation signs.

Our tour guide told us not to cross the road to photograph them as the levels of radiation are higher there.

We saw another group stand in that very spot.

I heard their tour guide telling them not to go further than the radiation signs yet our cut off point was the road before them.

This is one of the most radioactive areas in the world according to the BBC. 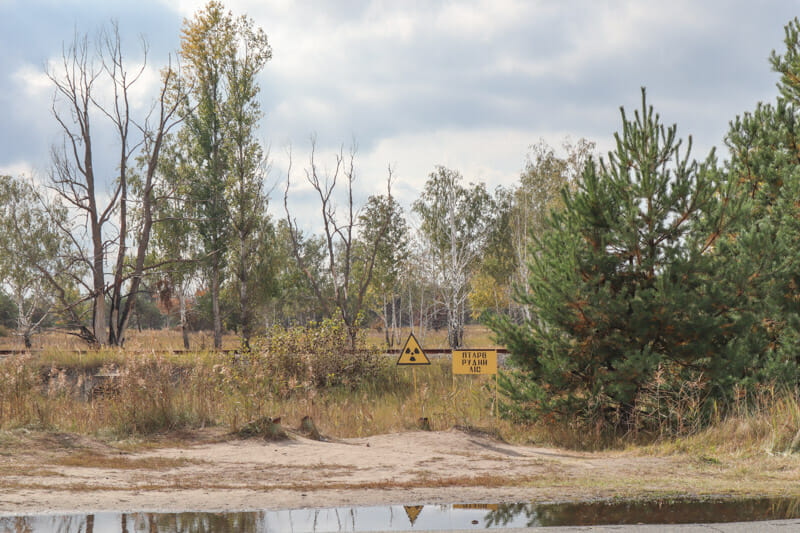 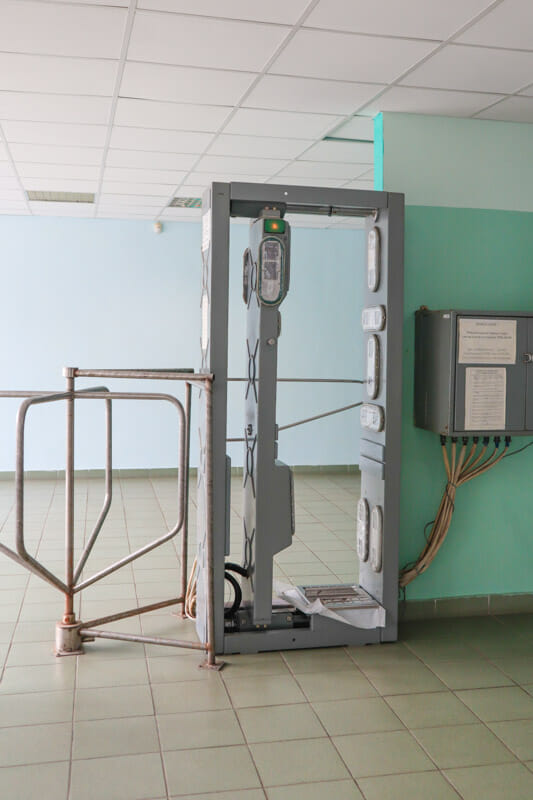 Throughout this tour, we visited some of the most photographed areas affected by Chernobyl such as: 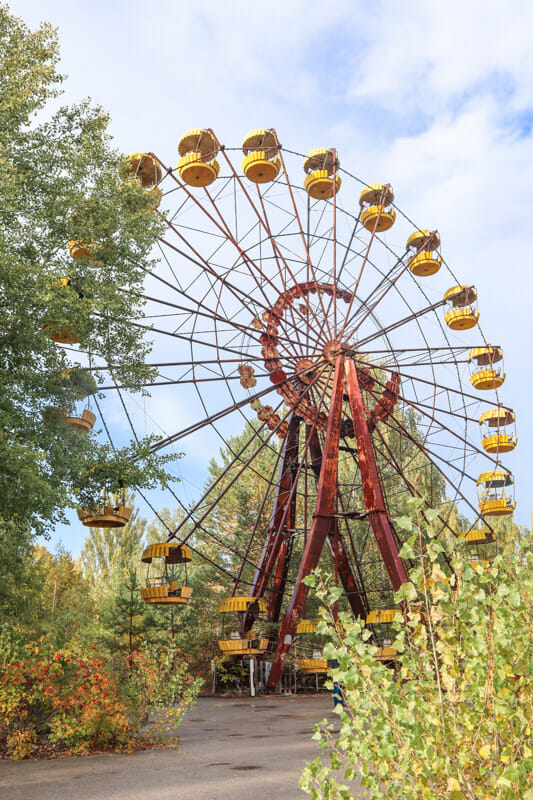 As well as some lesser-known locations: 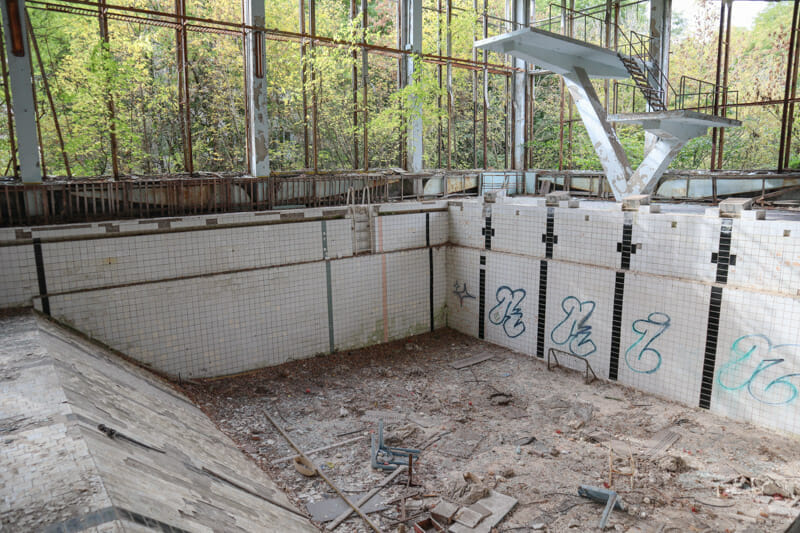 There’s quite a lot of street art around Pripyat and Chernobyl too. 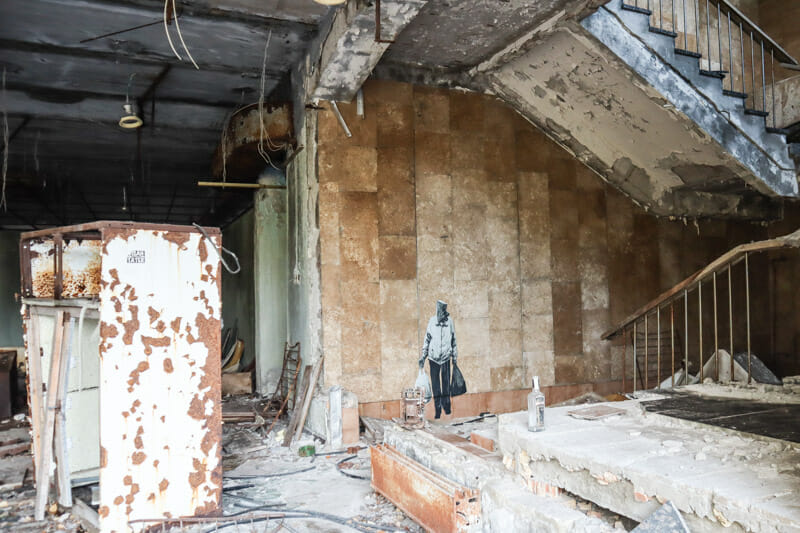 A Bit Too Efficient?

While the description of the tour says 12 hours, we arrived back in Kiev an hour early.

There was no explanation for this premature return but there were a few things that we didn’t get to see, such as the only standing Lenin statue in Ukraine and the port with sunken boats.

We did, however, experience a few things off the record which was made out to be slightly out of bounds.

I’m sure it’s just a gimmick but an appreciated one as it means you get to visit Pripyat Azure swimming pool featured in Call of Duty 4 and the views of Chernobyl from an abandoned high rise flat roof.

You really can’t grasp the magnitude of the disaster until you see the rows of apartment block roofs poking out from among the trees. These trees have taken over the region, against the predictions of scientists.

My friend Laura says that if she was to do it again she would book a two-day Chernobyl Tour to ensure that she doesn’t miss anything out.

Personally, I feel the one-day tour is enough but if I was to go again with Craig, and our travel business in mind, I would book a private tour. This would allow me to ask all the questions I want as I am that annoying person. A personal tour also lets you create a bespoke route. 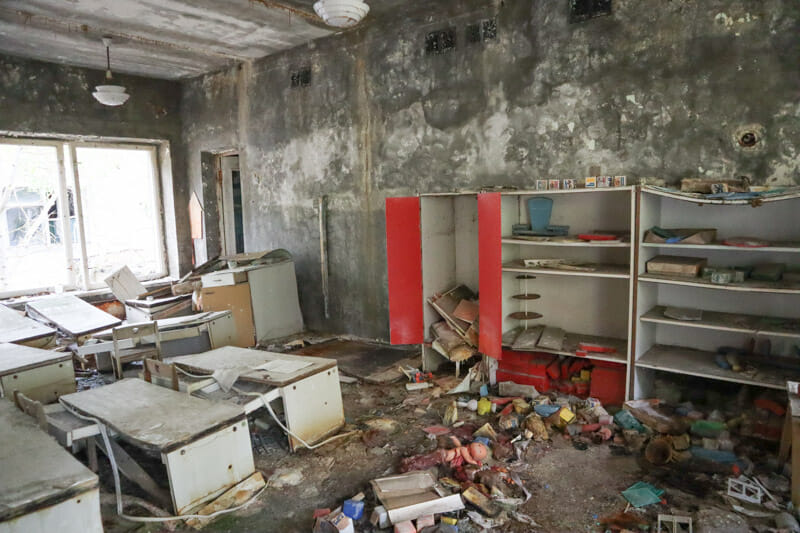 Chernobyl Is More Touristy Than You Think

As you first pull up to the Dytiatky checkpoint where you show you permission slip and passport to the police you will see a surprising selection of souvenirs.

Chernobyl condoms, gas masks and t-shirts with the Coco-Cola logo on it saying ‘Enjoy Chernobyl, Die Later’ hang in the windows of the shop cabins. The ice cream drawer says ‘Life is too short, eat ice cream, Chernobyl’.

I get the feeling there is a misunderstanding of who Chernobyl is being marketed to. We’re not all laaaaaads on tour. No one we met on our tour bus would fall into that category.

This is in no way a fault of the tour company as every tour group stops at these shops.

At times you have to remind yourself that around 4,000 people died because of the consequences of reactor four’s fate, 50,000 people were evacuated from Pripyat alone and innocent men went down for the crime too. 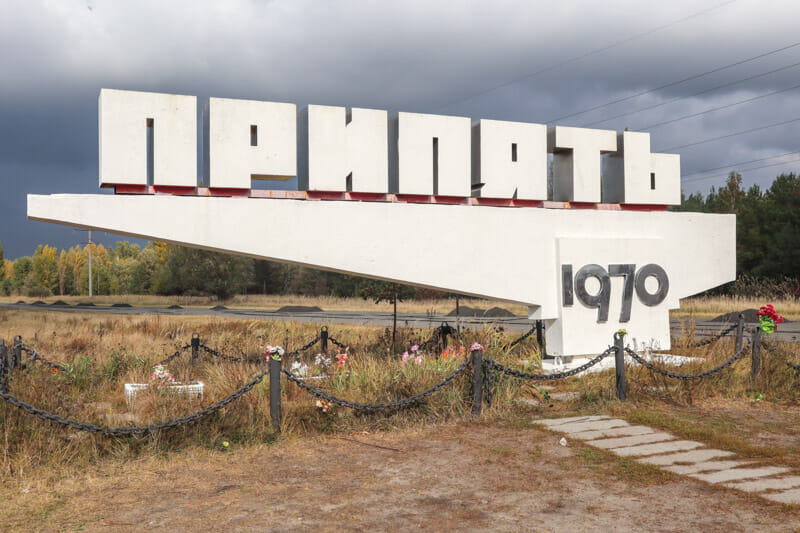 Thanks to our reader, Suz, for sharing her experience of the two-day Chernobyl trip.

I think if you go expecting basic you will be pleasantly surprised. The beds were big and comfortable and the showers were good despite being shared.

The food was very Ukrainian but filling and we really liked it although some in our group weren’t so keen.

I preferred it to the power plant canteen lunch.

The other benefit was that we could stay out later and be out early.

The checkpoint is closed from 6pm until 10am (plus the hour drive from the checkpoint in) so we had from 8am until 11am on our own which was great.

It also meant we weren’t racing back for the checkpoint on the first day.

The only problem with when we went was it was cold, very cold!!!!!

The biggest mistake people make when packing for their day trip is forgetting:

Planning a trip to Ukraine?
Pin to your board 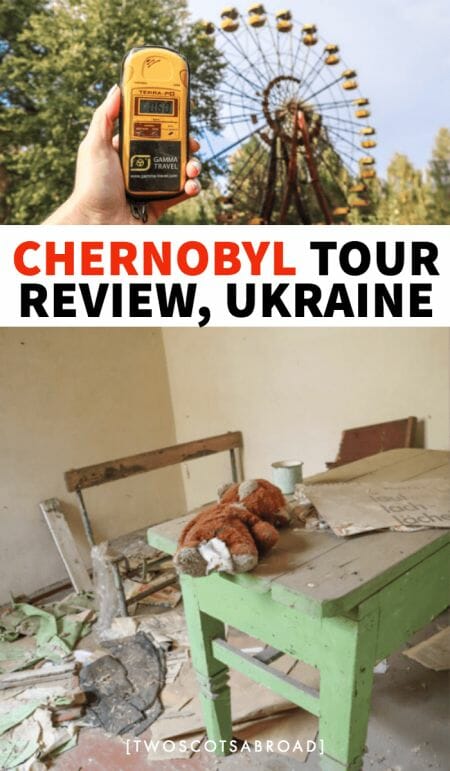 Chernobyl is a safe, historically significant and architecturally interesting day trip from Kiev.

I highly recommend going to see the cities that went against the post-nuclear explosion scientific predictions, where trees grow among buildings frozen in time.

Pack your camera and remember your empathy as you walk through the region that the world’s invisible enemy consumed for years.

6 thoughts on “Chernobyl Tour Reviews: How to Visit Safely ” 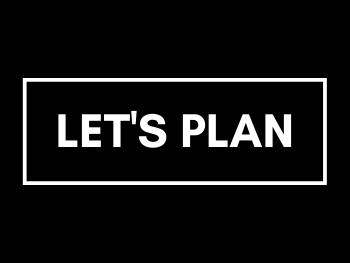 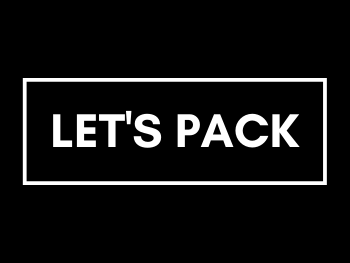 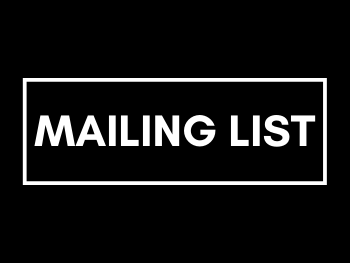