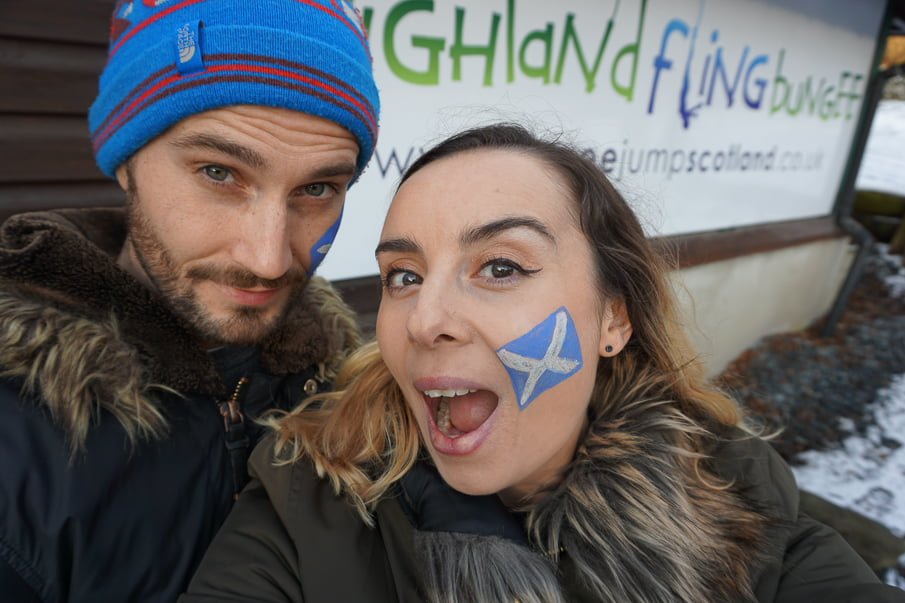 Nothing says love like wiping the snot from your husband’s face whilst dangling upside down. Move over Spiderman, this is true romance. Craig and I (Gemma) took the plunge, falling 132 feet from a bridge, faces painted with the saltire; bungee jump in Scotland style. Don’t believe us? We have the GoPro Hero 6 footage to prove it, snots and all.

This was my second bungee jump (bunjee jump? Who knows how to spell it) and Craig’s initiation into the world of ‘swinging’. I first joined the club over a decade ago in New Zealand, throwing myself off Auckland Bridge. During the run-up to this adventure day out, I was more horrified about the time which had passed since my last jump than the actual activity itself. This was Craig’s first bungee so I thought I’d give him some moral support via a hug – an involuntary one in the form of a tandem bungee. 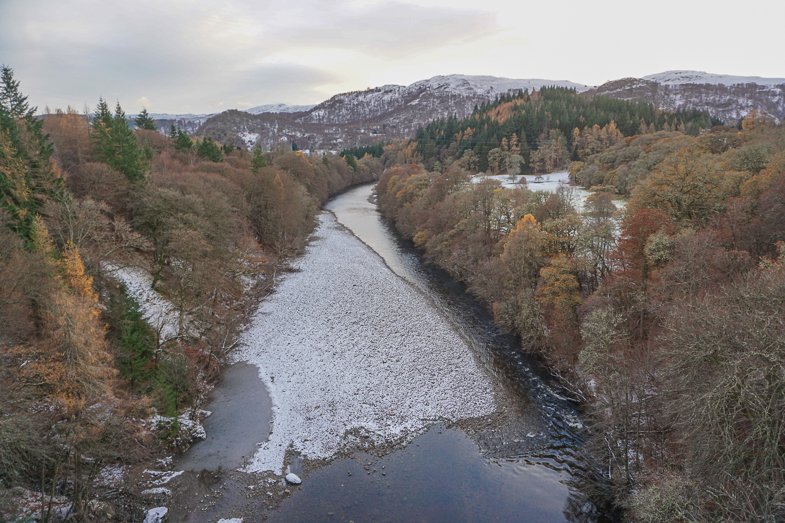 Was is a Tandem Bungee Jump?

Most jumpers fly solo, which allows you to dive forward or fall backwards. A tandem bungee is when you are attached to another person, side by side, not layered like a skydive (next on my itch-list). During a tandem you cannot dive, you wrap your arm around your sidekick’s back and hold on for dear life. It’s inevitable that you will end up cuddling during the flight.

Was the Killiecrankie Bungee Terrifying?

Craig, as cool as ever, had no qualms about the jump, until…

He was creeping towards the edge. The jovial support workers hooked us up, shuffled us along then Craig froze while tilted over the near-frozen River Garry in Perthshire! Too late, we were off. The flight was exhilarating, and like all good things, over too quickly. We giggled a lot as we came to, there’s no getting away from that embrace.

The dangling bit is never pleasant, both faces resembling a beetroot as the pulley was dropped and we were on our way up again.

During a massive 18-month career break to travel the Americas and Europe, we filmed ourselves boarding down an active volcano, diving in Cuba and trekking to Machu Picchu with a lesser-known model of action cam and man, the difference is night and day.

There’s a reason that GoPro is top of their game. The bungee jump footage was crystal clear, regardless of potential flailing arms (well done Craig, you excelled yourself filming our jump). We were able to film in a ‘wide mode’, which meant we could capture both of us jumping, and some of the landscape.

Regardless of filming in 1080 resolution (best for phones), the image still looks fantastic on our mammoth iMac screen.

I can’t lie, I was really nervous about filming with the GoPro in case we (Craig) messed up the footage or the GoPro didn’t play ball. It’s very obvious when it is filming as a red flashing light appears.

I also like that it tells you how much battery and file space you have left.

Anxious, as always, I asked online ‘what type of GoPro mount should I use for a bungee?’

Attaching the GoPro to the chest would mean that the video footage filmed the flight and landscape but not our faces. I wasn’t massively keen on this because I wanted to see Craig’s reaction/fear. A positive of the harness is that the GoPro is not at risk of falling off and the footage should be steady. The company at Killiecrankie bungee recommended this option.

If you can hold the selfie stick straight during the jump and remember to position the camera at your face, this would be a great option and there are definitely great YouTube videos of jumpers doing it well. We decided against the selfie stick since it was our first time using the GoPro Hero 6 and there was no attachment to connect to the wrist; cue panic, letting go and losing the camera to the River Garry.

Note: we used a cheaper selfie stick with our crappy old action cam and you can really feel the difference in quality. The GoPro selfie stick is sturdy, the moving sections allow for more flexibility and better angles. The camera grip is strong. You could knock someone out with it but it’s not too heavy for storage. We used it for the car ride imagery and the interview.

This is the option we opted for. The GoPro wrist mount felt secure, we could angle the camera to face us and because Craig held his arm straight like a bird with wings we were captured during the jump. I am really happy with the footage. What do you think? Tell us in the comments below.

The Quik video-editing app is as good as your WiFi is and unfortunately in our house, the WiFi is poor.

Quik allows you to snip, edit, add/remove sound, add music and text as well as packages it up in a theme for you.

It’s easy to use for short videos, it recommends how long they should be and has a fast and slow-motion function too, which is great for building momentum! Here’s our first attempt. Watch out for the snot! Volume up to hear Craig scream…

Would we bungee jump again, hell yes! Will we be filming another adventure activity in Scotland? I really hope so. Scotland is so much more than just Outlander, bus trips to battlegrounds and the Isle of Skye and we can’t wait to explore more, camera in hand (or on the hand!)

Are you brave enough? Tell us in the comments below.

Thanks to Currys and PC World and GoPro for asking us to put adventure Scotland on the map! Our honest opinion as always, regardless of who is footing the bill. Check out the
UK adventure map here.

Gemma and Craig are full-time workers with a life-long travel habit. Flirting with 40 and let loose on the world! Gemma writes, Craig looks good in the photos.